The Duchess of Windsor: Older Icon of the Fifties and Sixties 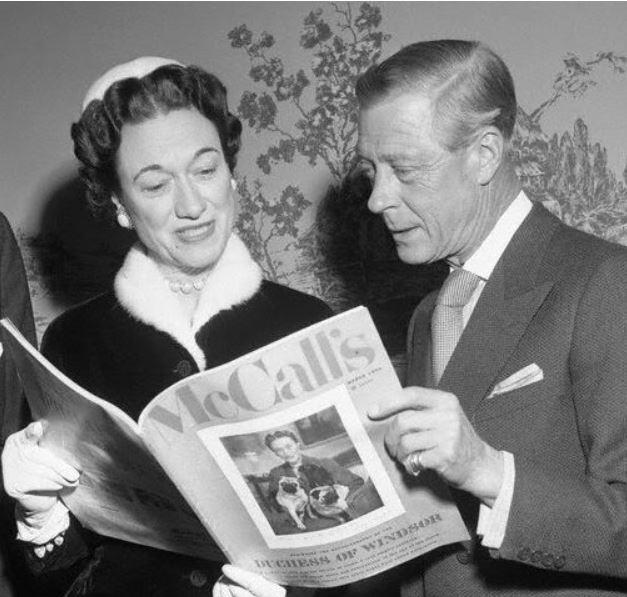 Looking over excerpts from her memoir, 1956. Corbis

I am not a fan of the Duchess of Windsor, American born Wallis Warfield Spencer Simpson (1896-1986). As far as I’m concerned, her biggest achievement was getting the Nazi sympathizer Edward VIII off the throne.

But my opinion notwithstanding, the Duchess of Windsor was a highly visible fashion icon for millions of American women. Already famous in the world of high fashion, in the mid 1950s she made a concerted effort to reach out to the average woman. Her 1956 memoir, The Heart Has its Reasons, was quite popular in the US and parts of it were serialized in McCall’s magazine. For women who sewed, she began to offer dress patterns in 1959 for the inventive sewing pattern company, Spadea. (I’ll write more about her patterns soon.) In addition, she wrote short columns for McCall’s and a number of newspapers on beauty, fashion, and entertaining.

In her fashion writing the Duchess, owner of a king’s ransom of jewels, presented herself as a populist. “Today many women are well dressed, even those without large bank accounts. The kind of wardrobe a woman chooses depends on her way of life, her inclinations, her figure. The only thing it doesn’t depend on, in fact, is money!” (“Here are my Designs for Dressing Well,” Los Angeles Times, September 27, 1959) Her ideas were unexceptional for the time—dress for the life you lead, don’t over- or under dress, and spend a lot of time shopping for items that will last several years.

Although the Duchess was well into her sixties when she started giving out fashion advice in print, she rarely mentioned age. Only when broaching the sensitive topic of pants and shorts did she draw a clear line between young and old. She allowed pants for everyone at home or on vacation (although “a woman must have the figure of a mannequin to carry off trousers with grace.”) But in her view, only young, busy mothers got to wear pants shopping. And “certainly no woman my age should venture forth in bikinis or shorts, or any woman even 30 years younger, unless her figure is superb.” (“The Duchess of Windsor Tell How to Stay in Style,” Los Angeles Times, September 11, 1960)

A decade later she abandoned her own advice, even donning hot pants. Unfortunately (or maybe fortunately) I was unable to find a photo on her in those.

1 Response to The Duchess of Windsor: Older Icon of the Fifties and Sixties