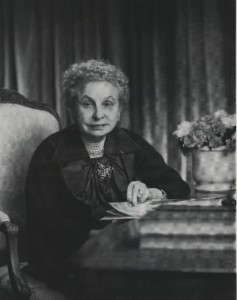 I have long wondered if long-serving Vogue editor Edna Woolman Chase was the inspiration for Mrs. Exeter.  Those of you who have been reading this blog for any length of time perhaps know of my fascination with Mrs. Exeter, an imaginary woman of a certain age invented by Vogue magazine to encourage older women to follow fashion trends. She first appeared in 1948, had a heyday in the early fifties, and then suffered a long decline, finally disappearing entirely in 1962.

I have been searching for the inspiration behind this charming marketing device for some time, and my hunt took me to the archives of the New York Public Library of Performing Arts on a recent visit to that city.  Edna Chase does not have her own archive, but her daughter Ilka Chase, a well known actress in the 1950s, does.  In those records are several folders of letters between mother and daughter, as well as many photographs.

Here’s what I learned from my adventure:  Edna Chase hated California and California designers; she gave her daughter a lot of fashion advice; and she was overcome with hatred for open toed shoes appearing on city streets.  Not a word hinted at Mrs. Exeter, but there were a lot of beautiful studio photos of Edna Chase in her sixties and seventies dressed in gorgeous designer clothes. This photo, one of plainer pictures in the file, was used by the magazine in its published eulogy when she died in 1957. Chase’s proud sense of aging well made me think of the magazine’s older heroine

The details of the fictional Mrs. Exeter’s life differed quite a lot from Chase’s.  Mrs. Exeter did not work (at least not at first), unlike Edna Chase who worked all of her adult life.  While Mr. Exeter gets no press at all, it is assumed that he gave her a comfortable home.  Edna Chase’s first marriage was difficult and she raised her daughter largely on her own.

But what Edna Chase shares with the early Mrs. Exeter is sense of contentment. They offer us their older bodies, hair undyed, faces unlifted, happy in their skins.  And of course, both are exceedingly well dressed according to the standards of their time.