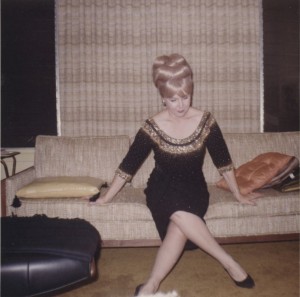 German American designer Irene Saltern (a merging of her maiden name Stern and her married name Salinger) is not well known today, but she was an important creator of California sportswear from the 1940s through the 1970s. Her life story is documented in her personal archive recently acquired by the University of California, Irvine. Born in a well-off Jewish family in Berlin in 1911, she came into adulthood just as Hitler took power. Her husband, a judge, lost his job under the new laws that excluded Jews from civil service. That made her the main earner for the household and she used her education in art and fashion to work as a journalist and fledgling designer. Interesting letters, photos and artifacts document this stage of her life, including many press passes and her 1935 German passport, complete with a swastika on the cover.

Through the help of family friend Albert Einstein, Saltern and her husband came to the United States in 1937. They settled in Los Angeles and she quickly found her feet in the fashion industry. In her first job with Republic Pictures, she traveled around the country giving lectures about the movies and fashion design.  In the publicity, she was listed as a “Parisian designer,” at best an exaggeration.  In 1938, she became a costume designer for her first film. During the next five years, she worked as a freelancer, moving from studio to studio.  Her husband’s letters to relatives make it sound like a difficult job: “Reni has to work very hard, sometimes more than 20 hours a day.”  The archive includes many drawings of her costumes as well as still photos from films

In the early 1940s, Saltern made a big move from costume to fashion design.  She took a position with Hollywood Premiere, one of the many sportswear companies designing clothes for a more casual lifestyle. She moved from there to Tabak of California, where she made a name for herself as a designer of coordinated separates called “Tabak Tie-Ins.” According to papers in her archive, these mix and match outfits were so successful that they were featured on television and one set was even acquired by the Los Angeles County Museum of Art. In the mid 1950s, she briefly had her own label “Irene Saltern of California,” part of TomBarry Industries.  After that she moved on to many different companies, continuing to design until she retired in the seventies.  You can see of some of her designs in the guest post I wrote for The Vintage Traveler. 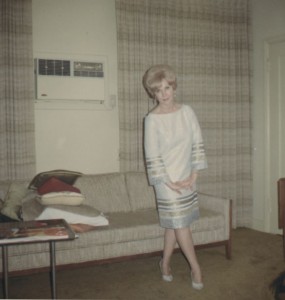 When Saltern began her California career, the sportswear industry was synonymous with youth. However, she quickly realized that her clothes needed to appeal to a broader (and older) audience as well. In an interview for California Apparel News in 1966, she said that she designed clothes for women aged 25 to 50. “These women have money to spend. They have cultured taste and abhor gimmicks. They exercise and watch their diets so they have streamline figures.  This past-girl is proud she is still young and has her figure and lots of pep and energy, but she isn’t as faddish as the girl in her teens or early 20s.”

Saltern wore her own designs throughout her long life. These two photos show her in her mid fifties wearing dresses she designed for the label Phil Rose of California.  Perhaps she was living out a prediction that she made in the 1966 article: “There is no such thing as an older woman today.”