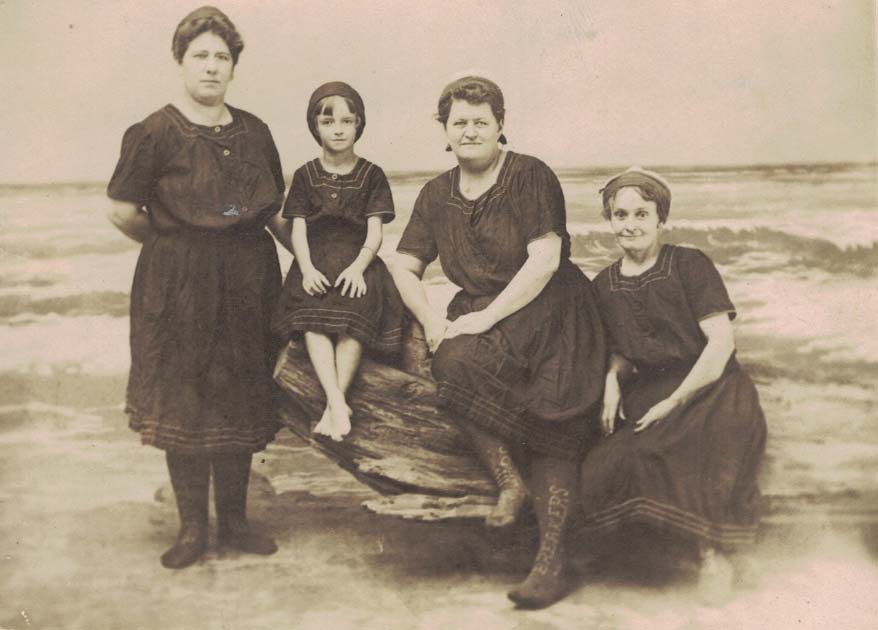 This photo postcard has a 1900s look about it, but historical events allow me to date it more precisely.  According to printed information on the back, it was taken at a photo studio at the Breakers Bath House in Galveston, Texas.  Brief internet searching revealed that the bath house was built in 1906 and destroyed by a hurricane three years later.  Although the hurricane ripped through the city’s bath houses, it was nothing like the mega storm on the Gulf of Mexico right now.

Note that all the females in this three (or maybe four?) generation photo wear the same style dress, probably supplied by the bathhouse.  You can even see the name of the establishment very clearly on the stockings of the woman in the middle.  They pose against a painted background and I wonder if the foursome actually made it to the water.

My friend Anne discovered this treasure in her parents’ basement in Laramie, Wyoming.  That’s a long way from Texas.  Her parents must have brought it with them from their home state when they moved north after World War Two.  Who were these four? She doesn’t know, and the back of the postcard is empty.

Flowers and the Older Women—Violets, Yes; Daisies, No
Harriet Strong, the Pampas Woman
On the Street in Chinatown, ca. 1900

This entry was posted in 1900s and tagged sportswear, Texas. Bookmark the permalink.