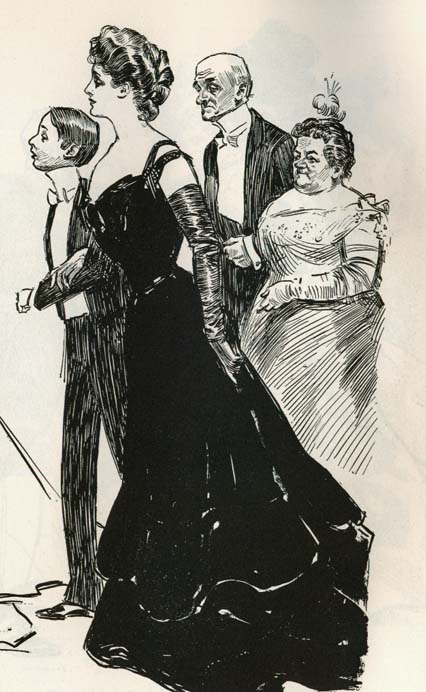 From The Gibson Girl and her America

The Gibson Girl is an American archetype–a tall, slim young woman with a big head of hair and an athletic disposition.  She was artist Charles Dana Gibson’s most famous creation.  However, he also drew other social types. In a collection of Gibson’s drawings, The Gibson Girl and her America (Dover, 1969), the editor Edmund Vincent Gillon, Jr. reveals the artist’s wide range. Included here are immigrants, foreigners, tourists, artists, and even a few women of ill repute.  A frequent object of his pen was the Gibson Girl’s mother.

While gorgeous young women are at the center of most of the drawings in this collection, there are enough representations of older women to make some generalizations.  The drawing here is typical. While the girl is tall and sleek, the woman is short and broad. While the girl wears very little ornamentation (who needs it when you are so beautiful?), the woman adds trimmings to her clothes and hair.

What I found most interesting were the color choices made in their clothes. The Gibson Girl is drawn in black, while her mother here and in other settings is often in lighter colors.  This reverses what I have often seen in photographs from the era, and goes against most fashion advice for the older set at the time. Did Gibson choose this color contrast to underscore the slim figure of the girl and broader frame of her mother? Or did this really represent the color choices of women in the circles where he moved?

Madam C. J. Walker’s Empire of Hair
A Uniform for the Old--A Lace Collar on a Black Dress
Rookwoods, 1907
This entry was posted in 1900s and tagged colors, generations. Bookmark the permalink.