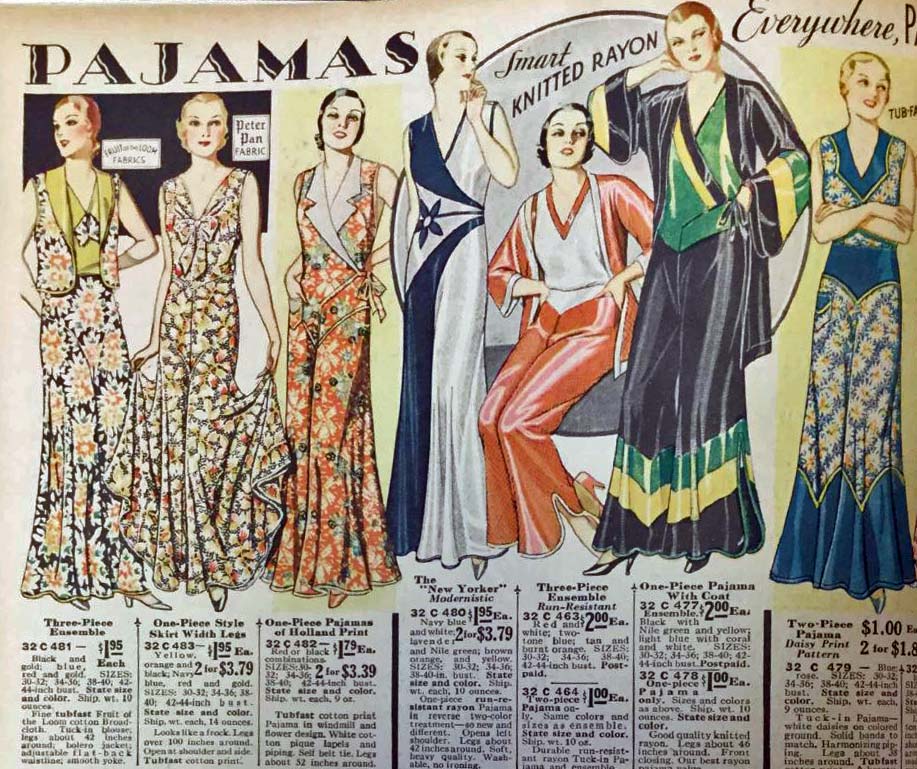 Two of my favorite blogs, The Vintage Traveler and Witness2fashion, have been investigating the pajama craze in the 1920s recently. I thought it would be interesting to examine the record in the world of down market catalogs

The fashion forward woman in the first half of the twentieth century probably did not turn to Montgomery Ward for her clothes.  One case in point is the trend for stylish pajamas intended to be worn  outside of the bedroom.  In Vogue magazine I saw the first feature illustrating a black velvet set clearly designed for evening wear in 1918. (“Paris Openings are Keyed to Victory,” Vogue October 1, 1918.) By the 1920s the magazine published numerous articles on where to show up in these stylish pants outfits.  One 1925 article, “The Pyjama: Once a Novelty, Is Now an Established Mode,” determined three different kinds of pajamas—one for sleeping, one for lounging, and one for the beach. “In fact, every hour of the day now has some use for this gay mode.” (Vogue, March 15, 1925, 102)

However, it wasn’t until the next decade that Montgomery Ward catalogs started to offer pajamas on their lingerie pages.  Some were in cotton flannel, obviously for sleeping.  But others in cotton and rayon, with one to three pieces, were clearly designed for outside of the bedroom.

While most of the outfits came in standard bust sizes 30-44, in 1932 one pajama set was to fit larger women, up to bust size 52. “Work in them, sleep in them, they are always comfortable.”

Ward’s made no specific mention of outside activities until 1933, when one ad had a definite maritime theme.

So the Montgomery Ward company took a very long time to follow the pajama trend.  Once it did, though, it gave customers a real bargain. In one Vogue ad, the upscale New York department store Bonwit Teller offered a three piece rayon jersey pajama outfit in 1931 for $49.50.  The most expensive offering in the catalog in the same year was $2.00.  Wouldn’t it be interesting to have a look at these two outfits to compare the quality?

At the Golf Course, circa 1940
Criss Cross--Age and the Surplice Neckline
Friends or Sisters, 1938
This entry was posted in 1920s, 1930s and tagged pants, sportswear. Bookmark the permalink.