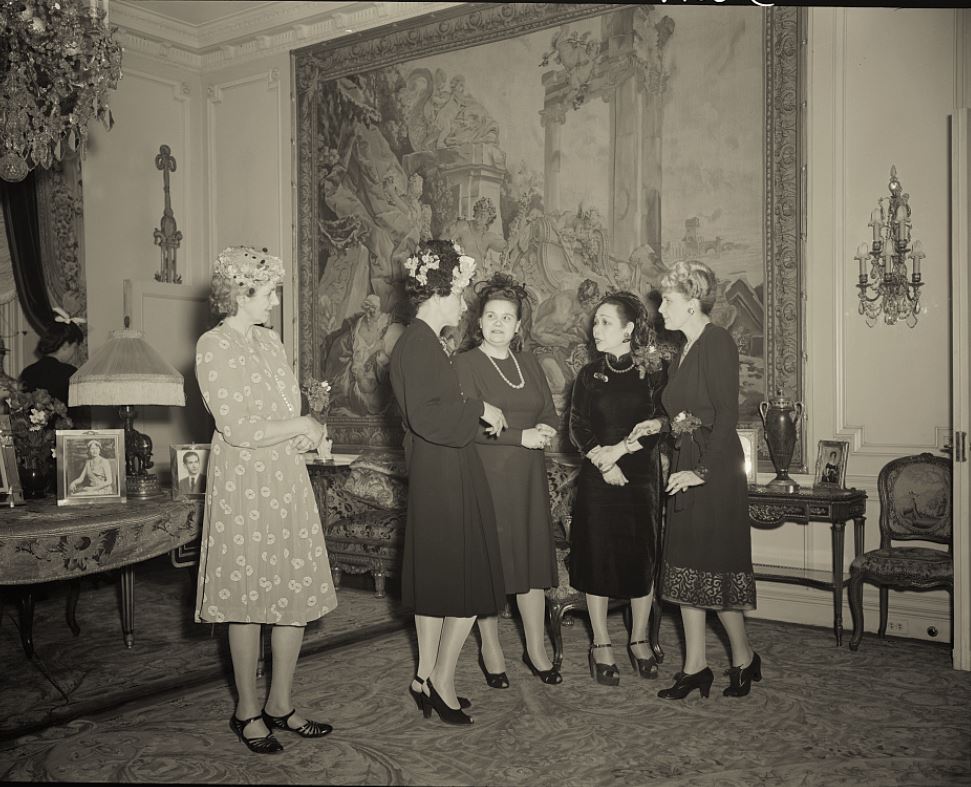 I’m publishing this post on March 8, International Women’s Day. Although the holiday’s origin was in the United States, it has never received much recognition here outside of the feminist movement. In the Soviet Union, however, it was a very important holiday. A strike by women factory workers on that day in 1917 started the revolutionary process that brought the Bolsheviks to power.  I imagine that this get together was held in honor of Lydia Gromyko, the wife of the Soviet ambassador.  She’s the youngest woman in the center.  Wives of the ambassadors from other Allied nations join her, including Lady Sassom from Britain (far left), Madame Bonnet from France (near left), and Madame Wei Tao Ming from Republican China (near right).

On the far right is the hostess is heiress Marjorie Merriweather Post Davies, entertaining in her elegant Washington DC mansion, Hillwood. Married many times, she was then the wife of Joseph E. Davies, who had been ambassador to the Soviet Union in the late 1930s.  In her late fifties in this photo, she looks elegant with her gray hair piled high on her head, a bouquet of flowers at her waist. I thought it was interesting that she is the only one wearing lace up oxfords, common in the US during the war, while the three in the middle all wear open toe high heels. Post Davies also has on the longest skirt. Note the scroll trim on the hem and sleeves.

It must have been a festive occasion—not only a celebration for women but also an event marking the imminent end to the Second World War in Europe. Just two months later it would be over.

Considering the Pinafore
The World of Mrs. Exeter
Medicalizing Menopause in the 1930s and 1940s
This entry was posted in 1940s and tagged shoes, special occasion, Washington DC. Bookmark the permalink.