For thrifty women who wanted to stay in style, the radical shift in silhouette brought about by the 1947 New Look must have represented a real dilemma.  What to do with all the perfectly good clothes from the recent past that were suddenly not the right shape?

This La Mode button ad from the October-November issue of Vogue Pattern Book suggested a novel solution.  “A pleated flounce of faille buttoned on the hem of last year’s wool or silk dress will usher in the new length and give it the Paris stamp! At the neck, a Bertha flounce, fashion’s newest fancy!” It is interesting that the company addressed itself not only to longer skirt lengths, but also shifts in shoulder shapes.

I think the final result looks more Native American than Parisian, but it does make the skirt longer and creates a distant echo of some of the new bodice shapes like the one below.

Surprisingly, the La Mode button ad was the only place in the magazine that addressed the idea of altering old styles for new.  I found this surprising, since Vogue Pattern Book readers were presumably the ones most likely to have the skills to make such changes.

Making over old styles was not easy, as a Life magazine article about Hollywood costume shops makes clear.  In “The ‘New Look’ for Old Clothes,” the writer elaborates the steps necessary to do a convincing job. 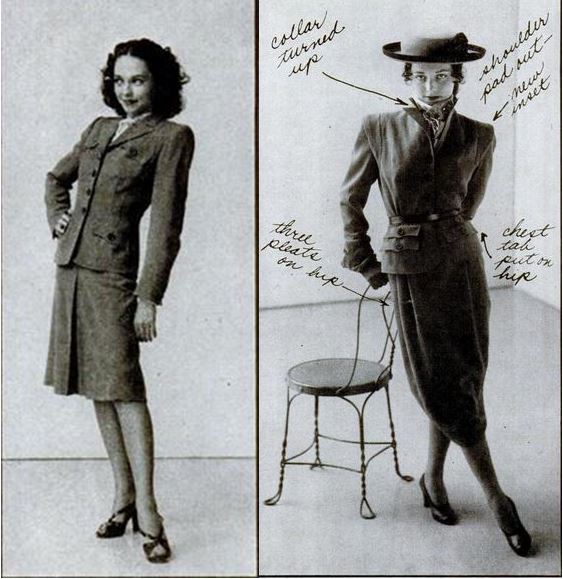 The suit alterations were particularly complicated. “Front and back pleats in the skirt were unstitched, making it a 36 inch tube.  Then the skirt was turned upside down.  Three unpressed pleats were made at each hip.  Side seams were tapered to give the new tulip look.”  (It’s not clear where the extra length came from.)  Maybe after reading this, skilled seamstresses decided it might just be easier to start for scratch.