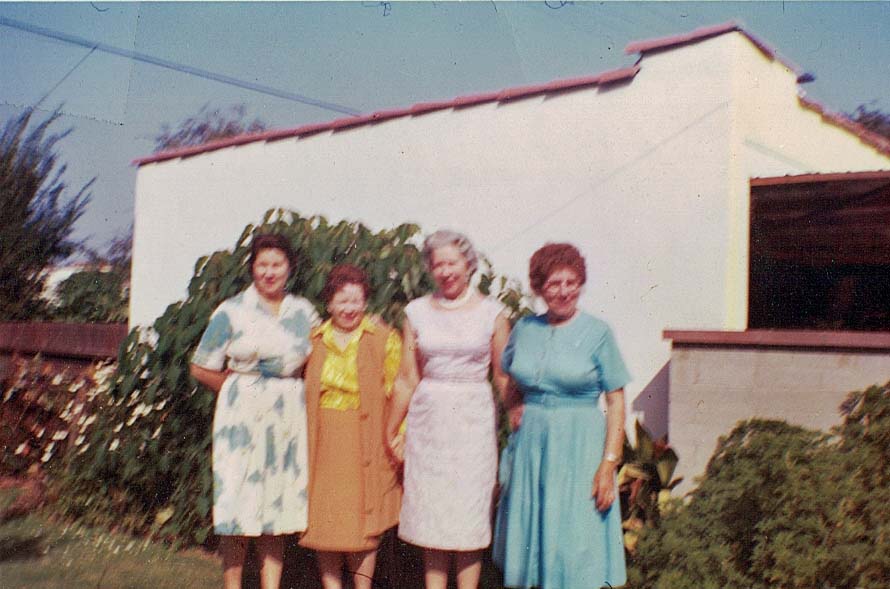 Maybe you don’t dress this way in your garden in October. In Los Angeles, however, the month can be very hot, with strong winds coming in from the desert. This snapshot gives names–Katherine, Ina, Della, and Flo–but no ages. The fuzzy focus makes guessing hard, but the three on the right look to be in their fifties.

I’m fascinated by the lack of sixties style in this 1964 photo. Beginning with their hair styles and (mostly) pastel palette, these women seemed more comfortable with the fashions of the previous decade. Katherine, far left, and Floy, far right, had on the shirtwaists so beloved in the fifties. You could still buy such outfits in catalogs and stores, but they were hardly in style. Della’s sheath dress was more current, but looser silhouettes were more up to date by the middle of the decade.

Only Ina, in her orange and yellow separates, had an air of the sixties. The color combination was certainly contemporary. But where did she find the long vest? Maybe she sewed it up herself.  As far as I can tell, such garments didn’t become popular until the seventies, so maybe Ina was a fashion visionary.