Me and Molly–A Play about Half Sizes 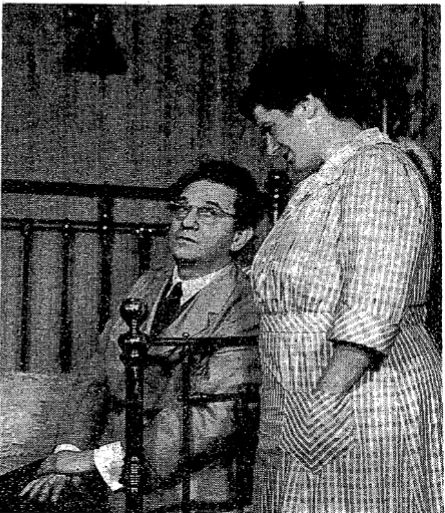 Still from the play Me and Molly, New York Times, February 27, 1948. Click to enlarge

Gertrude Berg (1899-1966) made a career out of bringing the Jewish-American experience to the nation.  In 1929, she wrote, produced and performed in the radio drama The Rise of the Goldbergs, later renamed simply The Goldbergs. It stayed on the air until 1946.  Before the story moved to television in 1949, it made a brief stop on Broadway.

Published and performed in 1948, Berg’s play Me and Molly shows the Goldberg family when it has just moved from the lower East Side of Manhattan to the Bronx.  The year is 1919.  The two American born children, Rosie and Sammy, are well integrated into American life.  The Eastern European born parents, Jake and Molly, have not yet fulfilled their American dreams.  Jake, who works as a sample maker, wants to start his own dress business.  Molly, played by Berg, wants to learn to read and write.  Her second most treasured dream is to be able to fit into a dress without extensive alterations.

While Jake is casting around for funding to start his business, Molly is developing a new sizing system on her own.  At first Jake is contemptuous.  “Molly, sizes are sizes…and if women don’t fit—alter!” (48) But Molly doesn’t listen. Seeing a challenge, she begins measuring her neighbors. “Yoo-hoo, Mrs. Bloom—you’re not a forty-four anymore; you’re a twenty-two and a half.” (57) A pattern maker friend makes the first patterns and soon her acquaintances have dresses that fit perfectly.

I think you can guess the happy ending.  Jake is eventually convinced, and even claims the idea as his own. “Molly has been canvassing the neighborhood for weeks for me to find out the average size of the average woman,” he exclaims to a rich cousin. “Every saleslady, every housewife, every stenographer will look like a fashion plate.”(75) Although the new business is not yet up and running by the end of the play, we are certain that it will be a success.

Who invented half sizes? I don’t think Gertrude Berg knew. But if you look at her shape—short and full figured—she must have been very happy to have them.  As she says in the play, “Why shouldn’t somebody like me be able to go into a store and come out without being altered.”

Hatless in a Hat Shop, 1942
Girl Group, 1940s
Trying on Hats in Bronzeville, 1941
This entry was posted in 1940s and tagged half sizes, Jewish American, New York, popular culture. Bookmark the permalink.

2 Responses to Me and Molly–A Play about Half Sizes