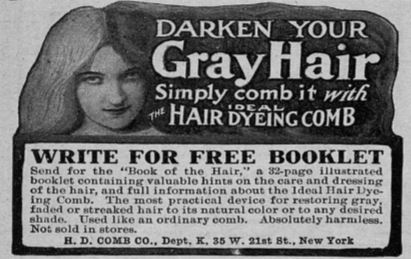 Women of every age and shape get constant tips on how to look taller, thinner, fitter, and sexier. Older women face an additional challenge: They are also supposed to look younger.  How does that trick get done?

Because most gain weight as they age, older women often receive hints on how to look slimmer in order to approximate “the figure of youth,” as some books say. The advice has stayed fairly consistent over the decades.  Dress in a column of color, preferably dark, that doesn’t break up the body. Choose diagonal or vertical lines to enhance the sensation of thinness.  Since skin radically changes with aging, long treatises on color have been directed to the older set.  Many advocate soft colors and soft shapes to distract from spots and wrinkles. The color black is a subject of fierce debate. Is it a miracle worker for elegance or a sure way to make skin look old?

Although not as prevalent in these days of gyms and yoga studios, earlier advice columns told older women to cover up those body parts that provided clues to age—the neck, the upper arms, even the hands. Not too long ago, the humorist Nora Ephron could call her book on aging I Feel Bad about my Neck. Even today fashion writers sometimes mourn the dearth of long armed dresses for those whose arms show signs of age.

While distraction and disguise were common tips for older women already in 1900, ways to change ones appearance through cosmetic intervention have increased significantly since then.  Hair dye was already advertised sparingly in the 1900s.  Now it is so common that women who choose not to dye their hair are more worthy of note. Face lifts began to gain attention in women’s magazines in the 1930s. By the 1960s, Vogue called them “usual.” Today there are all kinds of procedures for the face and other body parts designed to erase (temporarily at least) the signs of aging.

While I like to think that I am above such subterfuge, I’m not.  I dye my hair, exercise for health and vanity, and constantly search for the magic face cream. If someone invented a non-invasive, inexpensive, lasting way to get rid of wrinkles, I’m sure I would sign up.

What are you willing to do to look younger?

The Jumpsuit—A Style that Will Not Die
In the Swim, 1940s
A Very Colorful Kitchen

This entry was posted in General and tagged advice literature, colors, skin. Bookmark the permalink.

8 Responses to Fashion Advice for Older Women—Fool the Eye