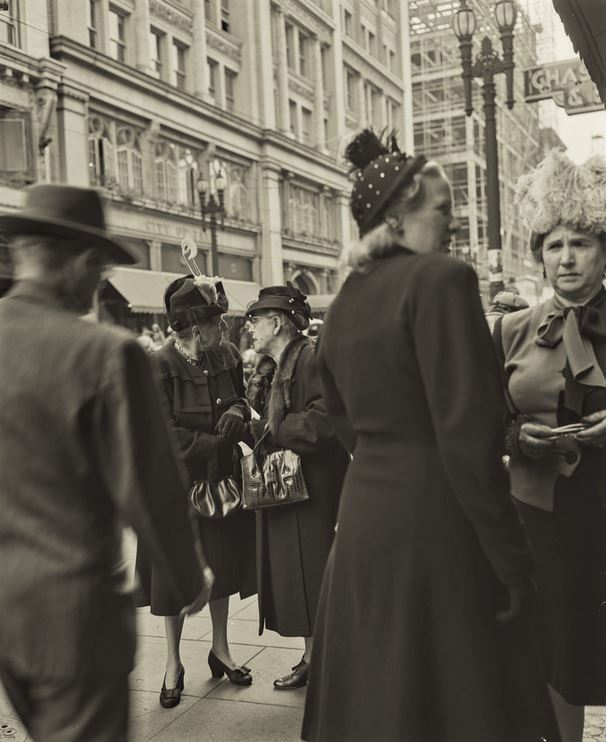 It pays to have friends who are librarians.  Ever since I started this project on older women and fashion, I’ve had the help and encouragement of Becky Imamoto at the UC Irvine Library.  She’s ordered books and online collections for me and has pointed me to collections held in other libraries.  Just a few days ago, she sent news that UC Santa Cruz (my undergraduate alma mater) had digitized its large collection of photographs by Ruth-Marion Baruch and her husband, Pirkle Jones.  Their political work is quite well known, but this fascinating collection is proof that Baruch had many other interests.

This 1947 photo was taken in the Geary Street-Union Square area, the fashion hub of downtown San Francisco.  All of the high class department stores, including I. Magnin’s, were located there. Given the coats and the colors, I would guess Baruch snapped this street scene in the fall of that year. All the women are quite dressed up by today’s standards, wearing hats and gloves. However, the longer and wider silhouettes of the New Look had not yet taken over.

At the heart of the shot are the two gossips, probably taking break from a day of shopping.  The woman on the left looks like she had kept up with styles during the war years, with her shorter coat and chunky pumps.  Her hat is an amazing concoction of low and high feathers.  By contrast her companion, with a modest hat and sensible shoes, looks a little plain. Her coat is longer, but it looks like she had held on to it since the thirties.

Don’t you wonder what they were talking about?

This entry was posted in 1940s and tagged California, coats, hats/headcoverings, shoes. Bookmark the permalink.

3 Responses to Gossiping on Geary Street near Union Square, 1947