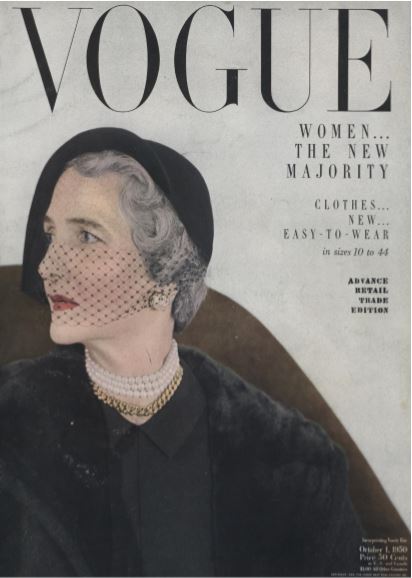 This issue of Vogue stands out already for its cover, featuring a stylish gray haired woman.  The content is even more surprising.  Its focus is on clothes for “the adult woman” and only older women appear to model them throughout the issue.

What prompted this attention to an older demographic? “One of the reasons for the stimulated interest in the adult woman may lie in the census figures: there are more people over forty-five than under forty-five, for the first time in American history,” the editors write in their opening essay. “This whole issue of Vogue is proof that attitudes change with the times, both the attitudes of women, and of those who design for them.” (121) 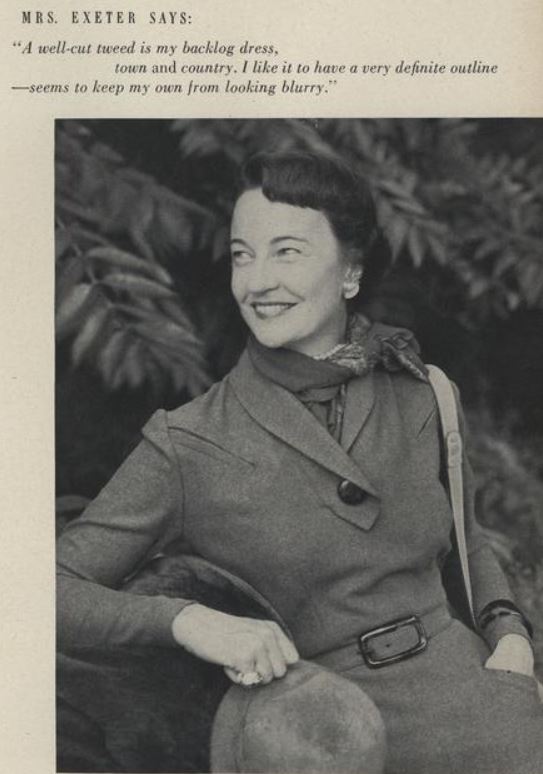 The fourteen page fashion shoot opening the magazine depicts women who look at least forty, with some much older. The photos are enlivened with quotes from Mrs. Exeter, Vogue’s imaginary fashion consultant for the older set.  The society section of the magazine has no debutants. Instead, there are older women of note, like the Irish actress Cathleen Nesbitt, then in her early sixties, wearing clothes made from Vogue Patterns. Older socialites, like Cordelia Biddle, wife of the novelist and philanthropist Livingston Biddle Jr., show off designer clothes. Mrs. Exeter gets her own four pages and even the cover mentions dresses in larger sizes, something Vogue usually hid in small print.

In case the reader had missed the point, an article by Marjorie Hillis Roulston (more on her later), makes it clear.  Her short piece, “Who is the Older Woman?” praises the growing numbers of women beyond their fifties who are using their energy and money to enrich American society.  “She [the older woman] is the woman, of all the women you know, accomplishes the most—in business or a profession or on the boards of important charities and civic enterprises. The years have taught her how. She is, finally the chief reason why people are saying, ‘It’s a woman’s world.’”(208)

Of course it’s easy to be critical of the attention given to a particular class of woman, assumed to be white.  Where are the poor women, the women of color, the women still working at low paying jobs? But I prefer to emphasize the positive—an entire mainstream fashion rag entirely devoted to older women.  Let’s challenge Vogue to do it again.

4 Responses to The Older Woman Issue of Vogue, October 1950