The Ahn Family at the Moongate Restaurant, 1961 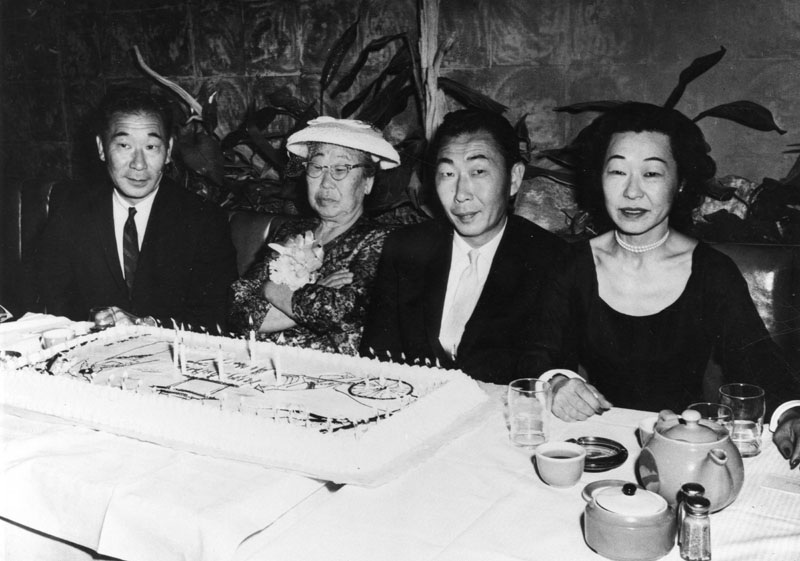 This wonderful photo, which comes from the LA Public Library’s “Shades of LA” collection, documents the 77th birthday party of Heyron (Helen) Ahn. While researching this image, I discovered how important the Ahn family was to Korean American and California history.  Here’s a thumbnail sketch.  The family patriarch, Ahn Chang Ho (pen name Dosan), was an central figure in the Korean independence movement. In the US, he and Heyron helped form some of the first Korean American organizations. Their children included the actor, Philip Ahn, pictured here on the left, who began his film career in Thief of Bagdad. By the sixties, he had become the proprietor of the Moongate Restaurant, where the party took place. Soorah Ahn, also an actor, is on the right.

What I love most about this image is the sartorial contrast between mother and daughter. The guest of honor, Heyron Ahn, has clearly decided to eschew current fashion trends. The lines of her flowered print dress, which looks to be a shirtwaist style, are clearer in the photo above. Her hat (a mushroom style according to my reference books) completes the outfit, an essential style element for women of her generation. Her outfit  has no hint of  the sleeker looks coming in with the new decade.

By contrast, her daughter daughter looks quite up to date. In her mid forties here, she wears a closely fitting black sheath dress.  She has also left her hat at home.

Eat My Words
At the Pool, 1961
Mother's Day in Milwaukee, 1963
This entry was posted in 1960s and tagged Asian American, California, generations, hats/headcoverings. Bookmark the permalink.

3 Responses to The Ahn Family at the Moongate Restaurant, 1961