Off to a False Start? The US Government’s First Attempt to Standardize Sizes 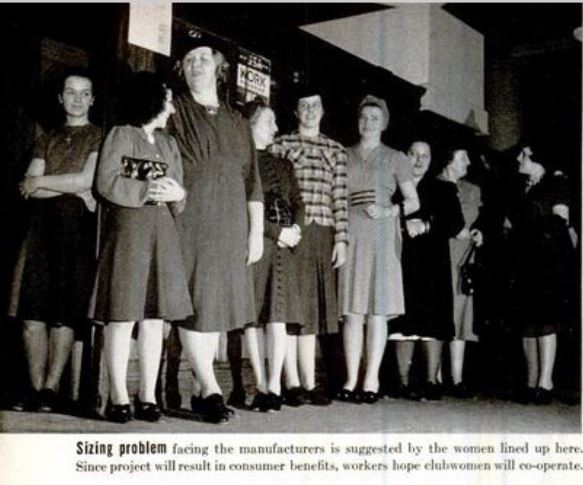 Finding a sizing system that suits most women is the gold standard for manufacturers, retailers, and consumers themselves. During the Great Depression, the US government decided to do something about the confusing array of methods used by manufacturers.  Using an elaborate system of measurements, 59 in all, and over 10,000 volunteers, the Bureau of Home Economics within the Department of Agriculture took on the task of developing new sizing charts to represent the female population more accurately.

From July 1939 to June 1940 women from all over the United States were measured for the study.  Most of the volunteers were employed through the Works Project Administration, (WPA), a big depression era government program. The photo above, from a Life magazine article on the project, shows that they were a diverse groups–tall and short, thin and large.

But were they diverse enough?  The compilers listed a few problems, such as the over-representation of Eastern urban women. They didn’t seem to notice that the lack of women of color might have made a difference. But a big stumbling block that they knew from the outset was the dearth of older women.  “It became apparent early in the study that too many young women were being measured because older women were reluctant to participate.”(25) You can read the study, in all its statistical glory, here.

So what does this mean? Even though the authors acknowledged that body shapes changed with age, the foundational study for sizing standards did not include enough older women to factor in those differences.

The statistics gathered in this study became the basis of government fit standards in 1958, revised again in 1970.  No similar widespread study has ever been undertaken.  If you are no longer young, think about this next time your clothes don’t fit.

3 Responses to Off to a False Start? The US Government’s First Attempt to Standardize Sizes