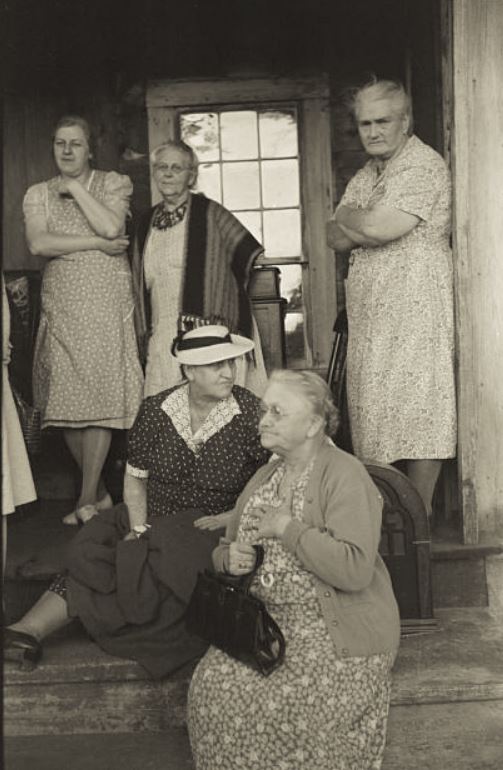 In her fascinating book Ready-Made Miracle, former Vogue editor and fashion historian Jessica Daves explains why it is hard to tell house dresses from street dresses in photographs from the 1930s and 1940s.  During the Great Depression, the federal government began to enforce strict regulations and wage rates for dress manufacturers.  However, house dress producers were exempted from the new rules because their products were considered necessities, not fashion.  Clever producers began weaving rayon fabric, sometimes called “artificial silk,” on cotton looms using familiar patterns.  They sold the clothes as house dresses, but consumers recognized a better product and began wearing them for fancier occasions.  “The new spun-rayon dresses brought a stirring of fashion life in this field—inexpensive house dresses began to be street dresses and began to be stylish.” (53)

In this in this photo by well known government photographer Jack Delano, I suspect there is a mingling of the two dress varieties.  The picture shows women gathered at a country auction in Vermont.  Some look more dressed up than others.  While the woman in the back on the far right wears what appears to be a well worn cotton house dress, the woman in the front in a sweater might have on a fancier rayon version.  And most fascinating of all is the one in the center at the back wearing a striped shawl and a large bib necklace.  Perhaps she was the local artist, with a style all her own.

Sensible Shoes through the Decades
Older Women and Defense Work during World War Two
Meeting Madame Eta at FIT
This entry was posted in 1940s and tagged house dress, Vermont. Bookmark the permalink.