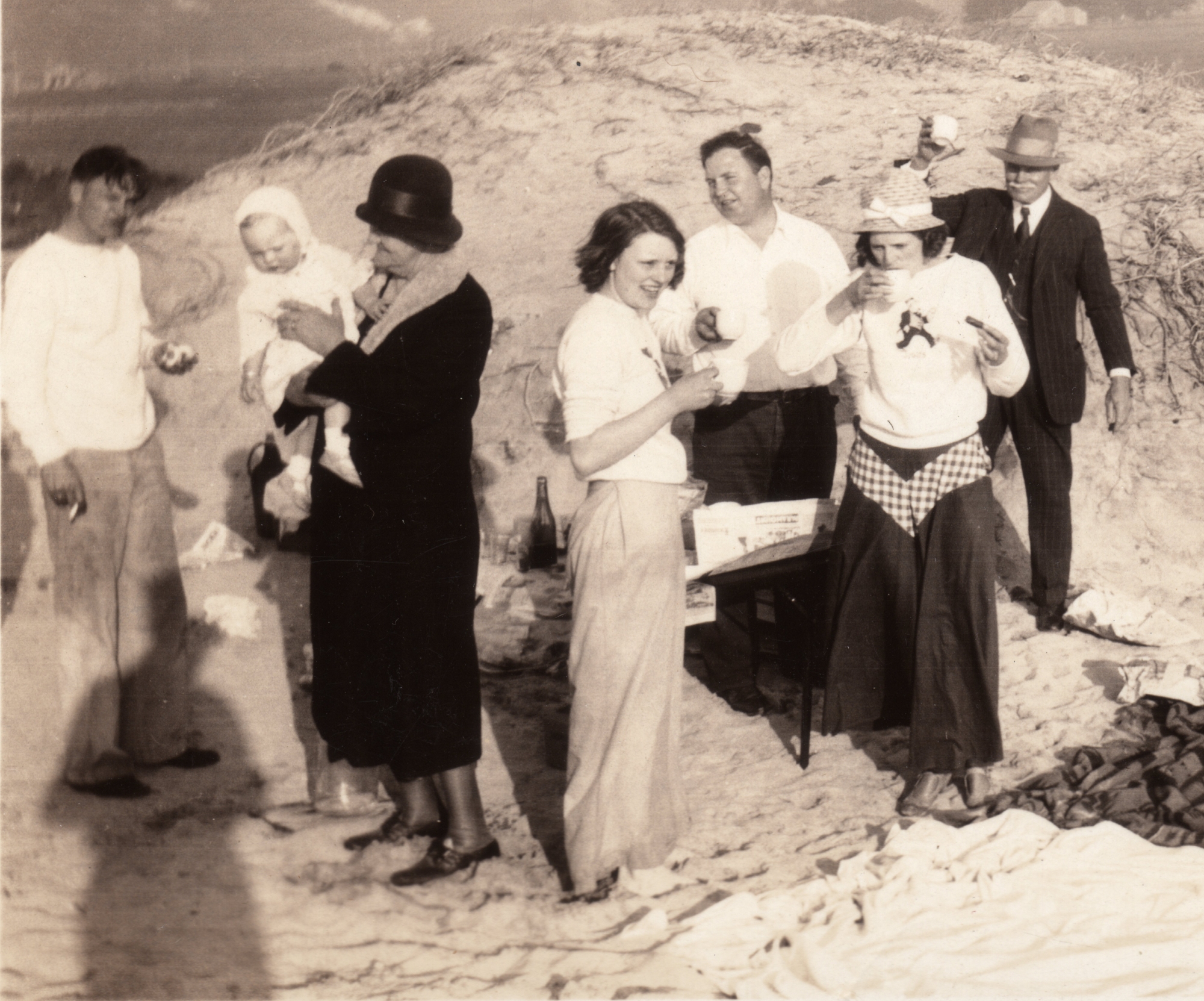 This looks like a fun party.  Even though it was 1933, and alcohol was still officially banned in the US, note the wine bottle in the background and the cups raised high.  The setting is Half Moon Bay, California, on the coast between San Francisco and Santa Cruz.  Like many beach towns, Half Moon Bay had its share of rum runners during Prohibition, so maybe they were celebrating a recent delivery.

Susan from the blog Witness2Fashion sent me this snap from her amazing stash of family photos. These were friends of her parents, people who knew how to have fun with or without alcohol, she wrote.

The photo is a study in contrasts between old and young, formal and informal, dark and light.  The breakdown is by age, rather than gender.  For both women and men, the older generation wore dark, dressy, out of date clothes, in contrast to the light colored, light hearted and casual outfits of the younger set.

The contrast is particularly extreme for the women. The two young ones sported casual, trendy beach attire. On the far right, the woman had on what looks like a wide divided skirt, almost transparent, and a sweatshirt with a cartoon character on the front.  (Susan observed that it looks like the character Jiggs from the comic strip Bringing Up Father.) The young woman in the middle wore wide legged trousers and a sweatshirt, which might also be emblazoned with a cartoon character—perhaps Jiggs’ wife Maggie, speculated Susan.  She wasn’t even wearing shoes.  Neither of these two would look out of place on a California beach today.

However, the grandmother holding the baby might have strolled in from a different fashion universe, or at least a different decade. She was in full 1920s attire, with her clutch coat, cloche hat, and black stockings.  Everything was black except for her coat collar. Since she had turned her back to most of the young people, I thought at first her plan was to rescue the baby from this band of happy revelers.

I wonder what the photographer, there in the shadows, was wearing.

Auto Camping in Dennisport, 1936
Sonia Delaunay—In Living Color
The Fourth of July in South Carolina, 1939
This entry was posted in 1930s and tagged California, colors, generations, hats/headcoverings. Bookmark the permalink.