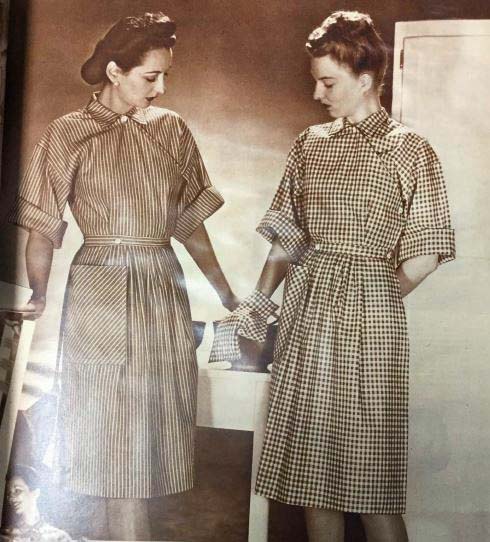 If any designer came to embody a streamlined, no fuss “American look” during World War Two, it was Claire McCardell.  She was famous for her innovative designs and inventive use of humble fabrics like gingham and denim. One of her most iconic dresses was the “pop-over,” a wrap around style that came with a matching attached oven mitt.

I was amazed to find McCardell pop-overs on offer not once, but twice in Montgomery Ward catalogs during World War Two.  (Unfortunately, my scans are poor, since the paper was both shiny and wrinkled.)  Unlike the Sears catalog, Montgomery Ward never used movies stars or celebrities to sell its clothes, nor did it use designers’ names.

So why did the company want to sell McCardell’s pop-over? Perhaps it was the dress’s wild popularity.  Fashion historians Kohle Yohannan and Nancy Nolf, who wrote Claire McCardell: Redefining Modernism (1998), estimate that the dress sold in the hundreds of thousands. The catalog thus offered its customers a chance at popular, everyday elegance.

Montgomery Ward also negotiated a good deal.  The pop-over usually cost about two dollars more than the $4.98 catalog price.  I thought at first it was perhaps  because this was a trimmed down version.  Unlike the dress in the Metropolitan Museum collection, it has fewer buttons and no quilting.  However, the Yohannan and Nolf book shows an ad for the exact same gingham version above on sale at Lord and Taylor for $6.95.

It would be fascinating to find out how many popovers the company sold.  While it was offering the dress at a very good price, it was still a relatively expensive option for the catalog.  In the same issue, fancier looking street dresses were on sale for $2.98. 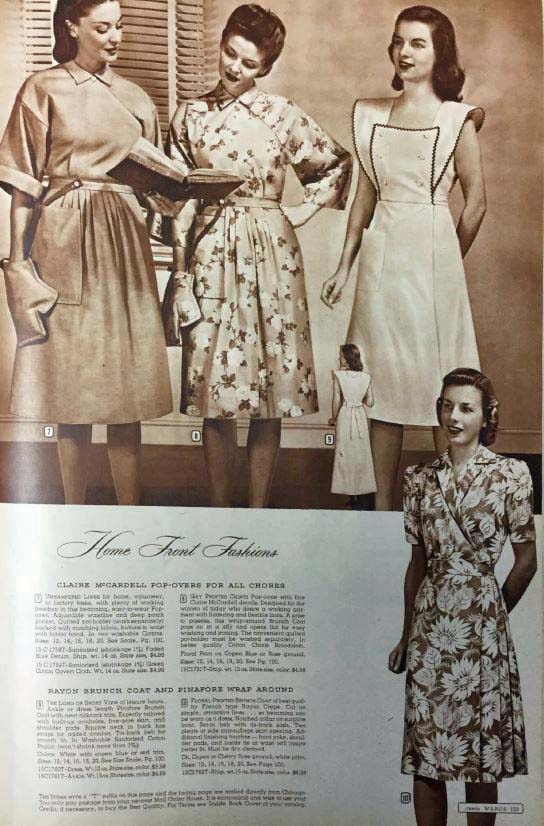 In the next issue, the popover appeared again, this time in plain cotton and printed chintz. But they had to share the page with Montgomery Ward’s own versions of at home wear, sold at the same price point.  Frankly, it’s hard for me to imagine who would have chosen such ordinary dresses over McCardell’s classic.

On the Boardwalk
The Journey to Internment
Mrs. Exeter's Birth
This entry was posted in 1940s and tagged designers, house dress, World War Two. Bookmark the permalink.