Patterns of the Times 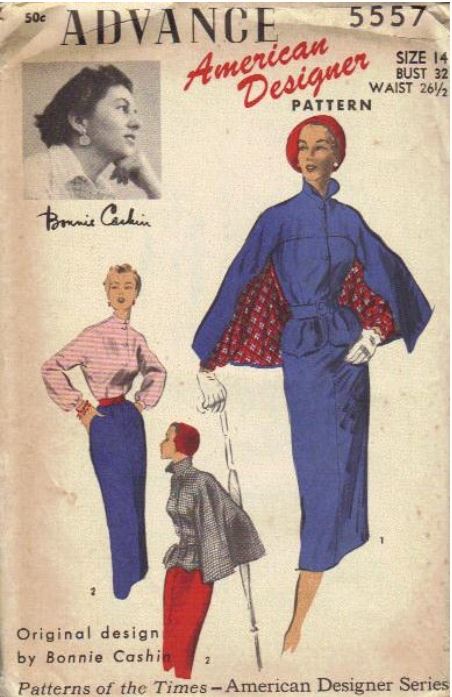 At the end of the 1940s and into the 1950s, the fashion editor of the New York Times, Virginia Pope, sponsored a series of patterns that were written up and advertised in the newspaper.  Published by the Advance Pattern Company, many of them were by unnamed pattern makers.  However, there was also a limited series of American Designer Patterns.  According to Wade Laboissonniere in Blueprints of Fashion: Home Sewing Patterns of the 1950s, the series was the brain child of Pope and the head designer of the Advance Pattern Company, Kathleen Hammond.

Many well-known designers of the era, like Pauline Trigère and Anne Fogarty, made patterns for the series.  Pope wrote the newspaper copy.  She suggested possible fabrics and styling, paying great attention to the appropriate occasion where the outfit might be worn.  Her writing was a combination of style advice and etiquette tips. With an eye to the broadest possible audience, she featured patterns for children, teens, and women of all ages.

Beginning in 1950, Pope devoted an article every month to one of the American designers featured in the Advance series.  The very first of these focused on Bonnie Cashin’s design for a toga cape, blouse and skirt.  In addition to a detailed discussion of the pattern, Pope offered space for Cashin’s fashion philosophy. “Above all, she wants to ‘contribute to the ‘figure of today.’ She thinks of clothes in terms of simplicity and directness, and of their relationship to space, line and color.  Hers is an architectural approach.”

As an older woman herself, born in 1885, she sometimes gave her views on suitable outfits for “mature women.”  In one 1952 feature on “Styles for Mature Figures,” she described a full-skirted dress in the following way: “The open neck is cut high enough to accommodate the fuller figure.  Many women will be pleased to know that this pattern also comes in women’s half sizes.”  The article also featured a front buttoned shorts length playsuit (or jump suit) with a matching skirt.  “The playsuit,” she writes, “is a neat and trim-looking fashion for wear in the house or garden, or for participating in sports.  When occasion demands, the skirt may be buttoned on quickly and easily.”  Note that she wanted to make sure that her readers knew not to wear the playsuit to the grocery store.

1 Response to Patterns of the Times