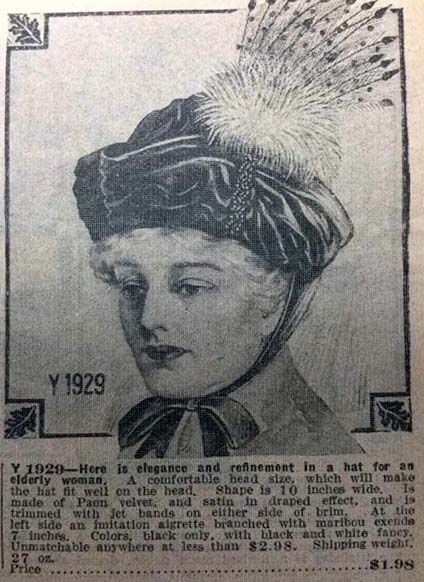 In 1912, the Montgomery Ward catalog went through a major revision that favored women clothing buyers.  Before that year, women’s clothing was scattered throughout the catalog; you had to look through the index to find everything offered to female consumers.  In a big reorganization that year, the company consolidated all of its women clothing in the opening pages of each big book.

In addition, the company began a more careful differentiation among its female consumers.  It was in 1912 that the catalog started to offer “stout” sizes.  Misses’ sizes, aimed initially to teens, were suddenly advertised as fitting “Misses and Smaller Women.” And if you looked carefully in the small print, there were references to older women as well. I caught this hat above, offered to an “elderly woman,” because of the drawing.  The face didn’t look as young and perky as the others, and the hair might conceivably been gray. 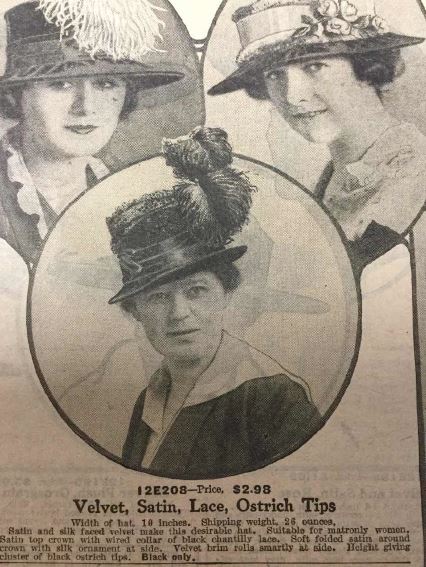 Advertising copy for hats was a favorite place to try out new terms for the older set. In 1917, a black hat with an ostrich plume was on offer for the “matronly woman,” visible in the description.

And a year later, the “mature woman” had an entire page of hats to choose from, with a banner headline at the top of the page.

During the 1910s, the company tried out many different adjectives for the older crowd.  By  the following decade, “matronly” had won out as the favored term.  But don’t try it today…

Fourth of July in Syracuse, 1918
Grandmother Smith with Ting and Ling
Mary B. Talbert, Feminist Icon
This entry was posted in 1910s and tagged advertising, hats/headcoverings, terminology. Bookmark the permalink.