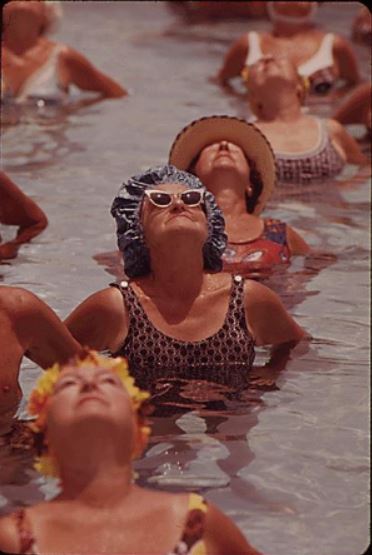 In the 1970s, the Environmental Protection Agency of US government sponsored a photo documentation project inspired in part by the efforts by the Farm Security Administration (FSA) during the Great Depression. Called Docuamerica, the project lasted from 1972 to 1978 and focused largely on environmental issues.  However, a significant number of the photos were records of daily life, just like the earlier photos were.

One photographer, Flip Schulke, had a particular interest in older Americans.  The photo above, of women doing water exercises at the newly opened Century Retirement Community in West Palm Beach Florida, is just one of many he took at that site.  See more of his striking photos here.

Did Schulke like older women, I wondered as I looked at this photograph. He has placed the one with most unusual style at the center, a woman in a shower cap and sorely out of date sun glasses. But then I thought that perhaps he was the forerunner of Ari Seth Cohen’s photographic lens—pick the one who stands out in a sea of flowered swim caps.