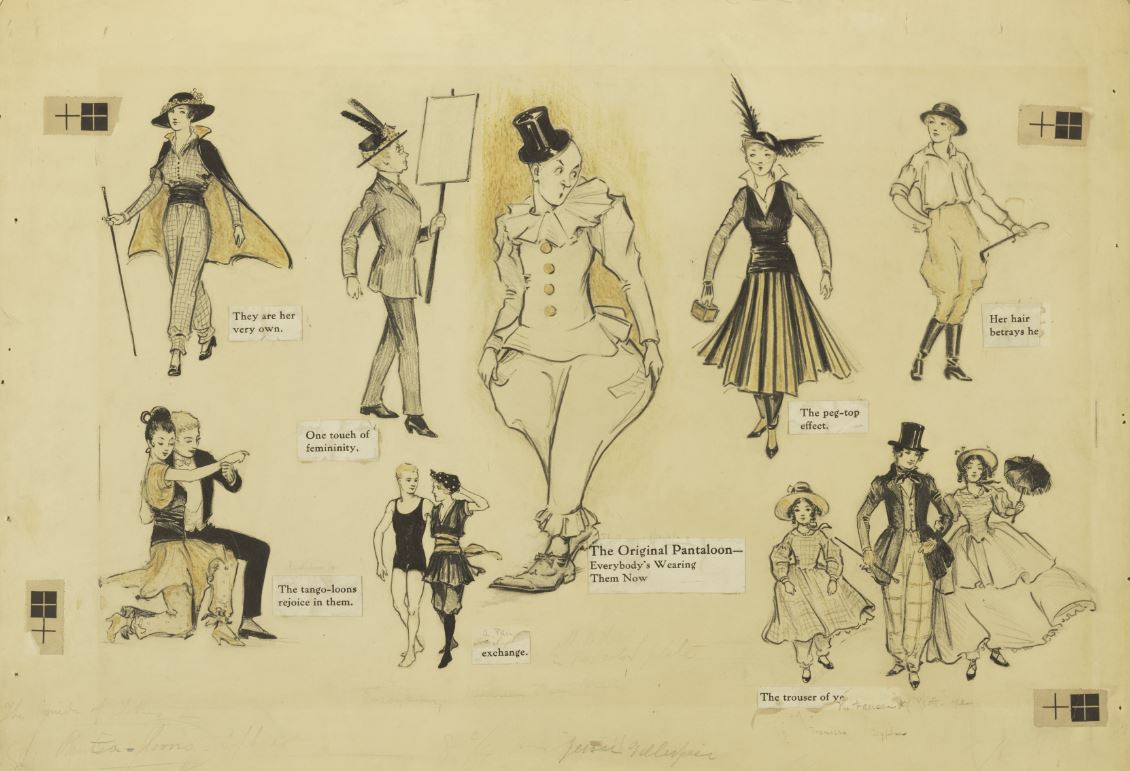 Pants for women were an extremely controversial issue in 1914, as shown in this drawing illustrator Jessie Gillespie made for the Evening Star Sunday magazine in October, 1914. Looking through the Library of Congress’s archive of American newspapers, Chronicling America, it appears she made several satirical drawings on women’s fashion trends called “The Comedy of Clothes.”

Her witty title for this drawing, “Panta-loons,” conveys the message that the women who adopted this style of dress were crazy or else following the style leadership of clowns, who wore “the original Pantaloon.” All kinds of women come under censure here—tango dancers (a fad at the time) who switched skirts for pants, style obsessed women who followed the most avant-garde styles, following French designer Poiret, and sporty women who wore pants out riding or to the beach.  I don’t understand the reference in the lower right corner.  Is meant to imply that the pantaloon wearing young girl of earlier times had never grown up in the present?

While most of the women depicted here look young, this protestor (one assumes for suffrage) definitely does not.  Her glasses, hair do, and double chin puts her in the older camp.  And she doesn’t wear on baggy pantaloons or bloomers; instead, her outfit looks like a tailored man’s suit. When I first looked at this drawing, I assumed that her “one touch of femininity” referred to the hat.  But at closer inspection, I think it might be her right shoe.  One step forward into the future.

Mother and Daughter on a Windy Day
Fourth of July in Syracuse, 1918
What to Wear on a California Vacation, 1914
This entry was posted in 1910s and tagged pants. Bookmark the permalink.