Posted on June 13, 2017 by americanagefashionco 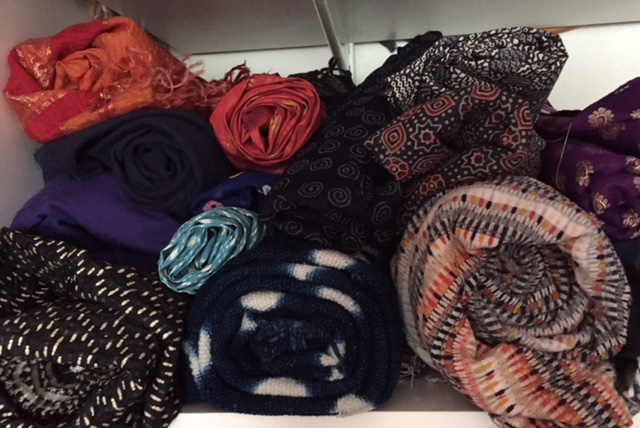 A small part of my fabric stash

On the face of it, home sewing is the opposite of fast fashion.  It can take mere minutes to make a jacket in a factory; a homemade jacket takes hours if not days.  In the eighties, McCalls advertised an “eight hour” tailored jacket using short cuts and fusible interfacing. The pattern was wildly popular, but the general consensus was that it took a lot longer than eight hours to make.

Critiques about the wastefulness of fast fashion abound. However, I think it’s high time that those of us who make our own clothes to start worrying about waste.  The fabric stashes we accumulate are composed of textiles that have harmful consequences for the environment, including dangerous dyes, pesticides for crop growing, and polyester filaments that make their way into the ocean. And what happens to those stashes when we move or die? Each year my sewing guild has a yard sale with piles of fabric going for cheap, and eventually for nothing. Some of that fabric eventually ends up in land fill. Add to that the waste from cutting, from muslins, from false starts.  It all adds up.

I read a lot of sewing blogs, some by women who sew more than a garment a week.  In one recent feature, an interviewer asked one of these super seamstresses how she managed the constant stream of clothes coming into her closet.  She purged her closet regularly, this woman replied, and gave the extras to a charity shop. Are these homemade clothes any less likely to end up in the trash than clothes made in factories? They are probably better made, but also altered for her individual shape.  It is not certain that they will find appreciative buyers.

As someone who loves to sew, I know that the process brings inspiration and joy. I have my own large fabric stash. But our pleasure also has costs.  Shouldn’t the same environmental principles that apply to store bought clothes—buy less, buy higher quality, wear clothes longer—also apply to those of us who sew?

An Old Woman Meets the President, 1976
Book Review—Fashion: A Timeline in Photographs, 1850 to Now by Caroline Rennolds Milbank
Book Review—Fear and Clothing: Unbuckling American Style by Cintra Wilson
This entry was posted in 2010s, General and tagged sewing. Bookmark the permalink.

7 Responses to Home Sewing and Fast Fashion–Thinking about Waste