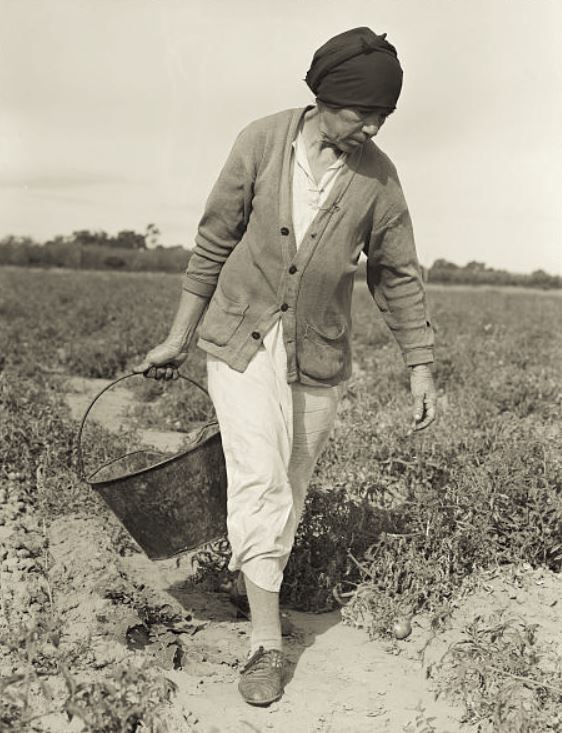 Dorothea Lange’s most famous photo is of the migrant mother, a young Oklahoma woman and her children in a farm laborer camp in California.  The migrant mother has become the iconic expression of hardship during the Great Depression.  But it was only one picture of thousands Lange took to document the era, like this migrant worker from another place and generation.

California agriculture was built on migrant labor initially coming from Mexico.  Lange’s caption for this photo reads, “Mexican grandmother who migrates with large family each year from Glendale, Arizona, following crops thru California and return. Here shown harvesting tomatoes, Santa Clara Valley, California.”  For those of you who don’t know California geography, the Santa Clara Valley is today’s Silicon Valley. This land today is probably covered with housing tracts or office parks. Although Lange calls the woman Mexican, she makes it clear that her family is firmly rooted in the United States.

Since the grandmother is picking tomatoes it is most likely summer in the Bay Area.  It can get hot in the Santa Clara Valley, so her outfit is probably put together to protect her from the sun rather than the chill.  On her head is a dark kerchief, tied African American or Rosie the Riviter style. A long, very old looking sweater guards her arms, and she wears thick stockings. Her shoes look like flat leather lace ups with cut outs on the sides, not initially intended for field work.  Most interesting is her dress, a very plain cotton style with a placket closure.  It looks similar to a loose nightgown.  The message this outfit conveys is one of practicality and poverty.

Lange wrote the captions for her own photos, and we are lucky to have the information we do.  Still, I can’t help wishing that she had written down more.  What was her name? How old was she? And just how large was her family that she traveled with up and down the length of California?

Visiting the New York World's Fair
Jo Copeland and her Daughter
Life on the Ranch, 1939
This entry was posted in 1930s and tagged California, Chicana Latina, hats/headcoverings, rural, shoes. Bookmark the permalink.