Spring Outfits for Mother and Daughter 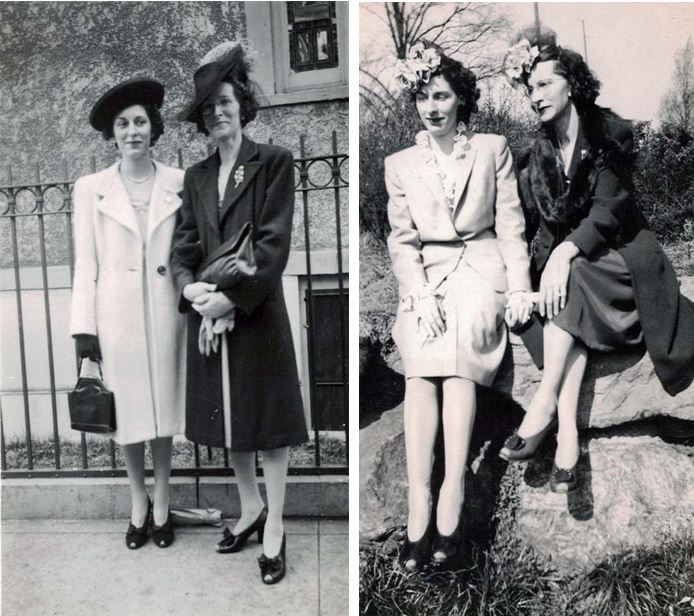 Appearances alone should be enough to identify these two women as mother and daughter, but each photo also has “Mom, me” written on the back.  On the left we see them in stylish hats and spring coats.  The daughter has chosen a very light color for hers; the mother decided on a more practical darker shade. Both wear pins on their lapels. Their coat lengths and shoes place them in the World War Two era.

In the picture on the right, they seem to be wearing almost the same hat, a frothy confection with lots of flowers.  The younger woman has on a suit with a frilly blouse.  Her mother still has on her coat over what might be a silk dress.  Draped over her shoulders is a long fur piece–I’ll bet it was not a new purchase.

It is hard to miss their stylish open toed shoes, all the rage at the time (and detested by some fashion advisors.)  If you look closely at the mother, she appears to have two different pairs.  In one photo her shoes have bows and in the other a kin of crest shape.  Or did she have shoe clips to give one pair different looks?

Although there are some differences between the outfits of mother and daughter, overall I was struck by their similarities. They live in the same fashion universe. But if the younger woman had a daughter and we skipped forward twenty years, I’ll bet that would no longer be the case.

Birds of a Feather
Book Review: Fashion Climbing by Bill Cunningham
Portrait of a Woman with Butterfly
This entry was posted in 1940s and tagged coats, generations, hats/headcoverings, shoes. Bookmark the permalink.

1 Response to Spring Outfits for Mother and Daughter