An Evening in India 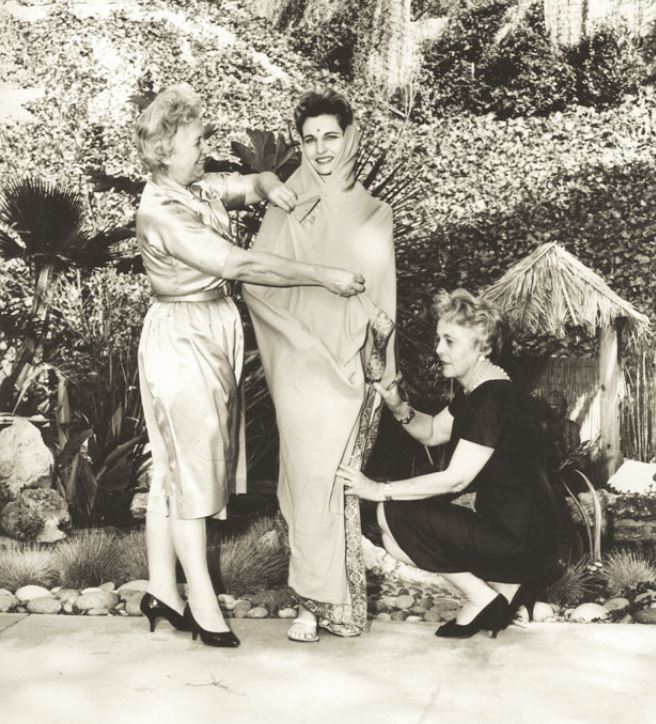 Charity balls have always confused me.  If everyone donated the time and money that it takes to plan and participate, wouldn’t that benefit the charity more?  But then we wouldn’t have photographs like the one above.

This staged shot was early publicity for the 1960 ball by the “Remember Me” charity of Los Angeles. It raised money for children with mental disabilities, or “retarded children” in the terminology of the time.  According to the LA Times, the organization was known for “sponsoring one of the most decorative benefits in this area.” There was a different theme each year—and the one chosen for 1960 was “An Evening in India.”

Here we see two older women draping a younger one in a sari.  The woman on the left wears a shirtwaist style dress, a beloved style in the fifties, dressed up in a silk satin looking fabric. The one on the right wears a very dark dress in a slimmer cut, anticipating the sheath dresses of the coming decade. The beautiful sari at the center shows the keen interest in Indian textiles in post World War Two America. I’ve written about it before here and here.

I chose this particular photo because I’m leaving for a two week trip to India today!  I probably won’t be blogging again until after Christmas, but you can follow me on instagram, @americanagefashion.

A Stylish Stout Woman at the Beach, 1953
Turkey Shopping in Boston, 1952
A Chinese Women's Club Celebration, 1951
This entry was posted in 1950s and tagged California, special occasion, textiles. Bookmark the permalink.

3 Responses to An Evening in India