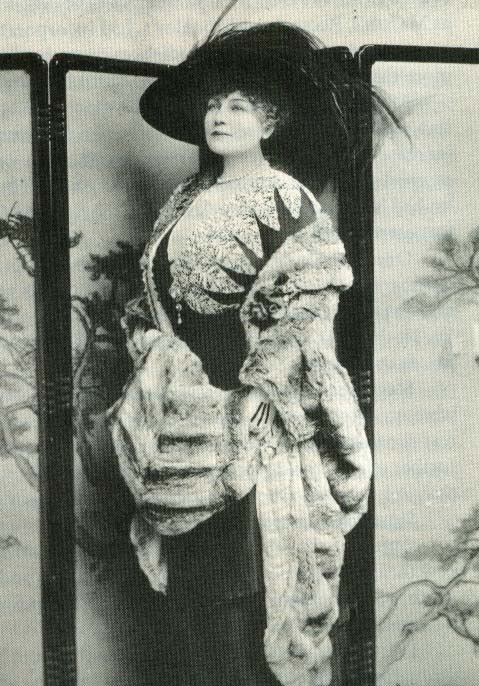 Although she all but is forgotten today, Lillian Russell was a big star of the American stage, music hall, and vaudeville circuit at the end of the nineteenth and beginning of the twentieth centuries. Called “America’s Beauty” for decades of her life, she embodied the full chested, slim waisted, big hipped ideal of the female form at the turn of the century. Through periodic reinventions, and a real skill at media manipulation, she managed to stay in the spotlight for over thirty years.

When Russell turned fifty in 1911, she started a sideline business as a beauty adviser to  women, with a special focus on older women. This included a lucrative stint as a newspaper columnist offering her “beauty secrets” (although the actual writing was done by her sister and heavily edited by writers on the women’s page.) Here’s a quick summary: eat well, sleep well, exercise a lot, don’t worry, and don’t flirt. As an advocate of physical fitness, she gave public demonstrations of her exercise routines, which included rigorous bouts with a punching bag and free weights.  When she went on national tours, her private Pullman coach was equipped with a gym.

Since dressing well on stage was an essential part of Russell’s job, she made annual trips to France to buy dresses from Charles Worth, the most influential couturier of her day.   While embracing French designers, Russell often recommended that the styles be modified for American tastes.  For example, she felt the slimmer styles that emerged in France around 1908 needed more leg room for American women used to walking.  Most of all, she advised women to look at their bodies before they adopted the latest styles.

In her fifties and sixties, Russell was a full figured woman in a time when slimness was taking over as the new feminine ideal.  She tried to give advice and comfort to those like herself who did not conform to the new trends.  As she counseled women to eat less, exercise more, and avoid pastry, she also assured them that “a certain amount of healthy flesh is normal for a woman.”

A Summer Idyll, ca. 1909
Older Women in Pants—Photos from the Teens and Twenties
Pants for Women in Montgomery Ward Catalogs, 1907-1924

This entry was posted in 1910s and tagged advice literature, designers, older icon. Bookmark the permalink.

3 Responses to Lillian Russell–An Older Icon for the 1910s