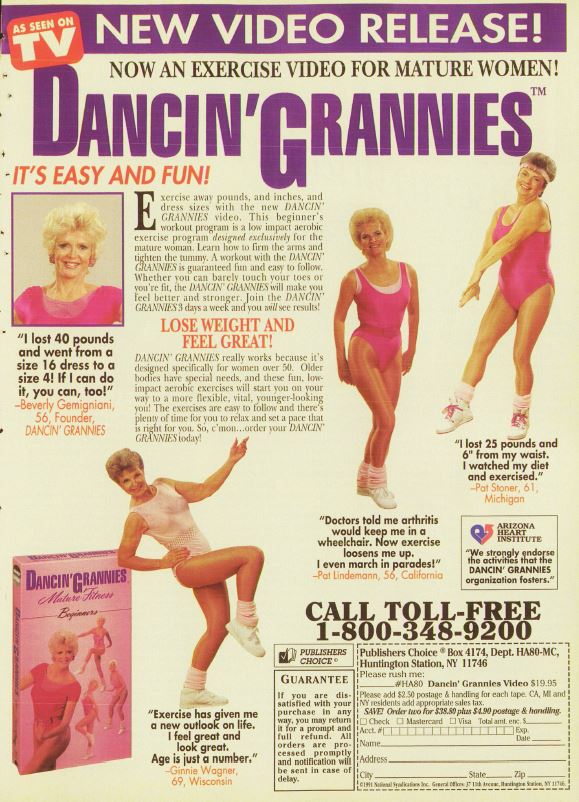 The image of the cheerful granny, used in the past to sell big ticket items like refrigerators, was completely transformed in this 1991 advertisement for exercise routines.  In this case, Beverly Gemigniani, founder of the group, was selling something that she made herself.

According to an enthusiastic account in the how-to book 100 Best Retirement Businesses, Gemigniani got involved in the aerobics world when she and her husband moved to Arizona in the 1980s. She soon discovered exercise routines were not geared to the needs of older women, so she decided to make that her focus.  It turned out to be a lucrative market. By the mid eighties, she moved beyond exercise classes to form a traveling dance troupe that performed at local events like county fairs.  The group hired an agent and by the early nineties they had appeared on TV shows, the Macy’s Thanksgiving Day Parade, and even at the Bush I White House.

The video enterprise (there were three in all) started in the late eighties. It brought the Dancin’ Grannies into households across America. Following the conventions of the time, they dressed in high cut tight spandex leotards with socks and gym shoes–think Jane Fonda, only older. When I searched for information about the videos on line, I found a lot of snide comments of the “can you believe this” variety.  Perhaps it was the name, the matching outfits, or the coordinated routines—you can find them on Youtube—that look a little like water ballet on the ground. But if you think about it another way, the Dancin’ Grannies were in the vanguard of the senior fitness movement.

Koko Beall—A Life in Fashion Design
The Caftan and the Older Woman
Women Get Weary but They don’t Give Up, 1991

This entry was posted in 1980s, 1990 and tagged cheerful granny. Bookmark the permalink.

3 Responses to The Cheerful Grannies Dance