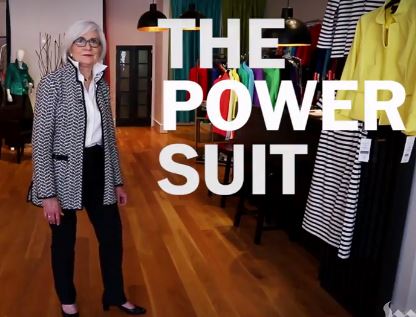 Pantsuits make news. Recently my sister sent me the link to this exuberant video of New York artists wearing all kinds of pantsuits in a flash mob dance for Hillary in Union Square.

On the same Washington Post page as the video was an interview with Nina McElmore, a designer who has made the power suit her life’s work. A trio of heavy hitters—Hillary Clinton, Janet Yellen, and Elizabeth Warren–all wear her clothes.  McElmore describes her creations as meeting the “needs of senior professional and executive women and women who are active in their communities.”  Fashion reporter Robin Givhen, who conducted the interview, describes her as the “go-to liaison between the fashion community and some of the nation’s most powerful women.”

McElmore was a former executive for Liz Claiborne and she sees herself as continuing the company’s original mission.  Liz Claiborne aimed to clothe younger women entering the job market; McElmore’s target audience is older women who have made it to the top.  The clothes aren’t cheap, around $800 for a jacket.  But they are made in the US from natural fibers and cost less than equivalent designer brands.

The essential element for any woman who wants to convey authority is a jacket, according to McElmore.  Hers have narrow shoulders, a slightly defined waist and sleeves with cuffs that can be rolled up. There is room in the back and sleeves for motion. One signature element is a collar that can be worn down or up. The up position radiates confidence, she claims.

While women need suits, they don’t have to look like men.  Most of her clothes come in colors and she doesn’t make many jackets in solid black. Black dulls many skin tones, she says. Color helps women stand out in the room. 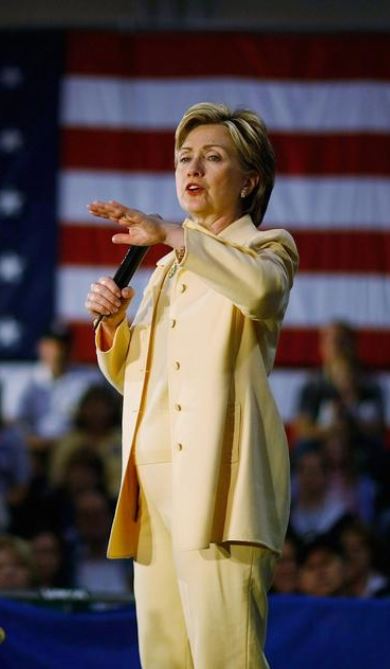 I noticed that McElmore wears her jackets with dark (probably black) pants, the same way Elizabeth Warren wears them. Hillary, on the other hand, usually has on a monochrome ensemble with matching jacket, top, and pants. I like the mismatched look better.

Back when I was still teaching, I never entered the classroom without a jacket. It gave me authority, protection, and handy pockets.  Too bad I didn’t know about the collar trick.

6 Responses to Nina McElmore—Putting Punch in the Power Suit