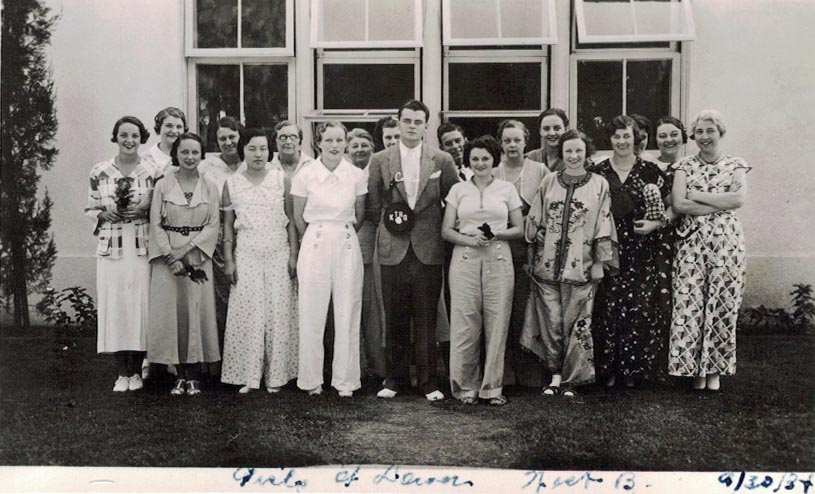 This picture needs its own short story, or maybe its own novel. At the center is a young man with some sort of hanging logo for the radio station KTRB. He is surrounded by women young and old, many wearing pants. (There is one other young man in the back.) The inscription at the bottom is hard to read.  Maybe “Girls of Devon West B.” What is your best guess?

The radio station was easy to find.  KTRB opened in 1933 in Modesto, a town located in California’s Central Valley. It quickly moved to the bigger market of San Francisco the following year. This 1934 photo was probably taken in San Francisco, a city with a well established Asian American population. That helps to explain the multi-racial participants, with one the young Asian American front left. The embroidered silken Chinese outfit worn by an Anglo woman front right could easily been bought in San Francisco’s Chinatown. 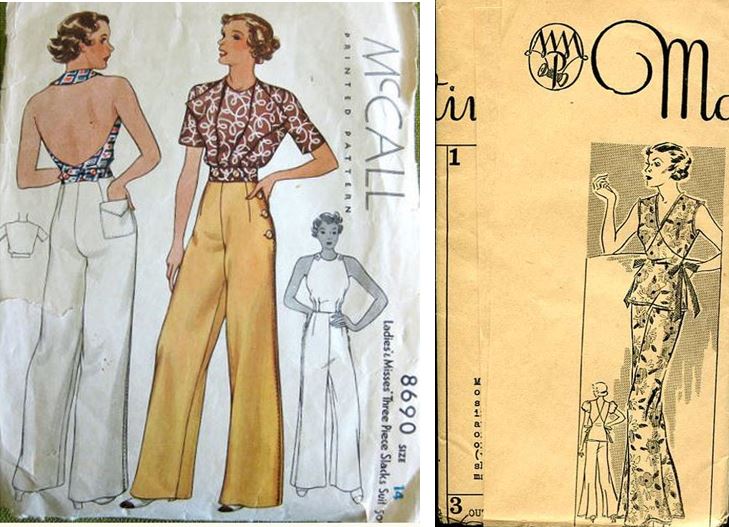 We see several kinds of pants outfits here, including the popular sailor style and what I guess are matching top and bottom sets in prints that end up looking like beach pajamas.

If looks don’t deceive me, an older woman in the back row might also have on pants.  I think there are cuffs just visible in the shadows by her feet.

But the mystery of the pants party remains. Was it an after work get together with a dress code? Or better yet, perhaps the cast party for the radio drama “The Girls of Devon West B,” featuring the stylish women of San Francisco? Perhaps you will have better luck solving this riddle.

Wisconsin Scrubwomen, 1933
Ho, Ho, Humbug--Thoughts on the Christmas Sweater
Sewing for the Works Progress Administration, 1936
This entry was posted in 1930s and tagged Asian American, California, pants. Bookmark the permalink.