Dresses versus Pants–A Tale of Two Women in the 1970s 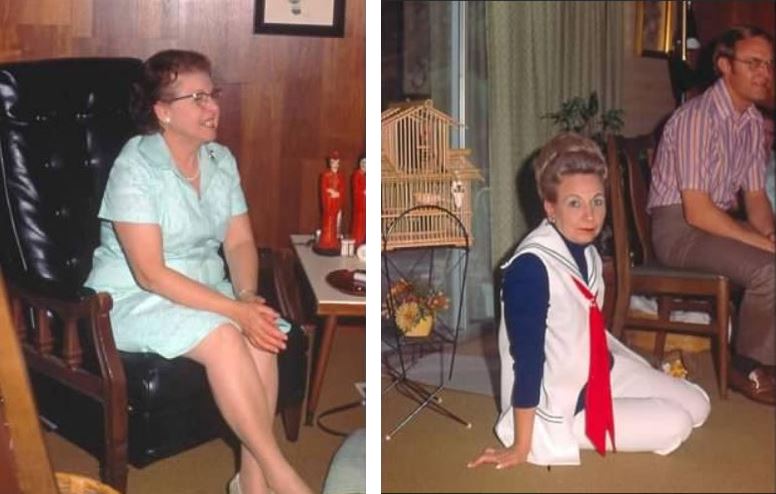 Reader Keri Payne sent me stories about two older relatives who had radically different styles, one always in dresses and the other always in pants.

On her mother’s side was her grandmother Nell Blair, born in 1906.  She wore muumuus and house dresses when in casual settings, while putting on nice dresses with a girdle when she received company or went outside.  Here’s Keri vivid description of her grandmother: “I’m pretty sure she made this dress [pictured on the left]–she taught me to sew as a child and sewed for herself, me and my mom all the time.  She never got her ears pierced because she was scared, so always wore clip-ons and a brooch.  She loved a pretty brooch!”  Keri doesn’t remember her Grandmother Blair ever wearing pants.

At the other end of the clothing spectrum was her Great Aunt Mary Murphy, the sister of her paternal grandmother. Widowed at an early age, she got a job as the entertainment director at a retirement home.  “Mary’s nickname was ‘Babe’ and I LOVED my Auntie Babe,” writes Keri.  “She was fabulous and always had some kind of pant suit on.” In the picture above on the right, Babe wears a nautically inspired pants outfit.  Although she doesn’t remember her exact age, Keri guesses that she was in her fifties when the photo was taken.

Keri’s stories raise tantalizing research questions.  By the 1970s, many women were turning to pants suits, including older women.  But how old exactly? My maternal grandmother was just a few years older than Keri’s and she also never wore pants outside the home (or in the home either, to my knowledge.) Do any of you know women born in the first decade of the twentieth century who switched to pants as their basic attire by the seventies?

Mary was at least a decade younger than Nell and worked outside home.  Do these factors help explain her embrace of pants suit so soon after they became acceptable street wear?

This entry was posted in 1970s and tagged pants. Bookmark the permalink.