It’s not easy to find pictures of older women in swimsuits. While the women depicted front and center in these photos might not yet be fifty, they certainly qualify as no longer young.

Just where are they? The second shot shows a pool but without any children in the water.  Is it grown up hour at the Country Club?  Or perhaps the pool is set in a retirement community.

Spandex hit the market in 1960, and swim suits with this stretchy fiber were readily  available by 1961. They provided a kind of girdle effect, which many women liked.  But the bather in the first photo has definitely ignored the new trend.  Her suit is both baggy and oddly revealing, showing very clearly the shape of her breast.  We can’t see all the details of the second suit, but it looks like it has a lot of stretch. 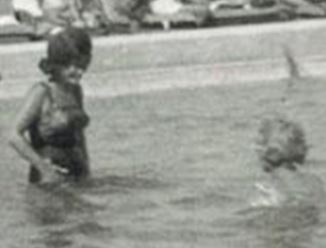 I was eleven in 1961 and spent a lot of time at the pool–a kind of Southern Californian child care. What brought back the most memories for me was a small detail in the background of the second photo.  It shows two older looking women in the pool carefully avoiding ruining their hairdos. Splashing them was a real temptation, so maybe that’s why children were banned from the pool.

Ann Person of Stretch & Sew
Half Sizes, Part 4: What Not to Wear
Mother and Daughter, 1960s
This entry was posted in 1960s and tagged hair, sportswear. Bookmark the permalink.