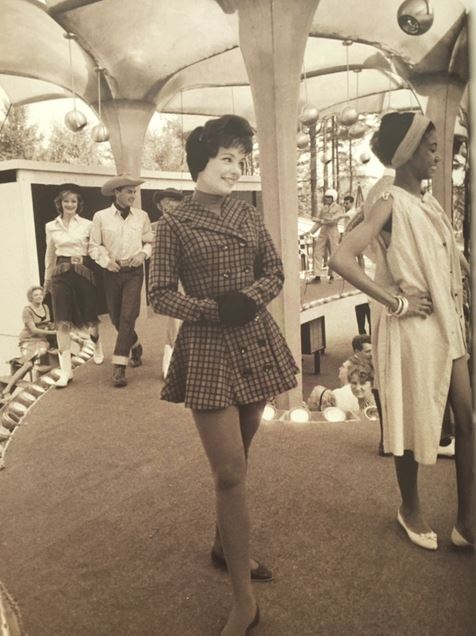 In 1959, the US government opened a big event in Moscow—a huge exhibition designed to showcase the consumer marvels of America.  Along with kitchen appliances and a prototype computer, US fashion was on display daily.  This photo shows two controversial elements of the fashion show—the very casual clothes and the integrated runway.  Tucked away in the lower left hand corner is a tiny picture of the mastermind of the Moscow runway—fashion impresario Eleanor Lambert. She’s is her mid fifties in this picture.

Lambert (1903-2003) was a publicist for famous designers and the creator of organizations and prizes that promoted the American garment industry. Her advocacy for American fashion had a global reach. She organized fashion shows in Europe, Asia, and Latin America.  This was not her only venture to the East Bloc during the Cold War. When the Soviets staged an International Fashion Exhibition in 1967, Lambert organized the United States’ contribution.

I found this information in a recent book by John A. Tiffany, Eleanor Lambert: Still Here (2011) Tiffany was Lambert’s assistant in the 1990s and had access to her archives. His coffee table book includes documents from her files and many rare photos. It’s a big brick of a book and was hard to track down through inter-library loan.  But it is worth the effort if you are interested in how American fashion was marketed to the world.

Some time ago I bought a used copied of Lambert’s book World of Fashion, which contains information about designers and fashion schools from around the world.  I was surprised to see an informative section on fashion design and production in the Soviet Union. Now I know that she had first hand information from her travels to Moscow.

What other insights will we discover about this amazing woman when people begin to work through her newly opened archive at FIT?

This entry was posted in 1950s and tagged comparative. Bookmark the permalink.

1 Response to Eleanor Lambert in Moscow