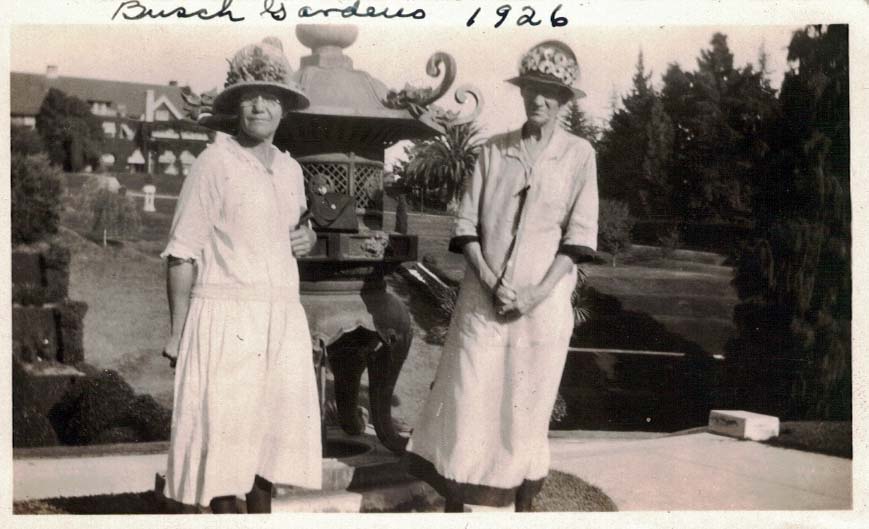 There have been many Busch Gardens in the United States, but I was surprised to learn that the original one was in Pasadena, California. It was located on the grounds of the winter home of Aldophus Busch, who owned the famous beer company Anheuser-Busch.  The park existed from 1906-1937 and was a major tourist attraction. Many films were made on the extensive grounds, including parts of Gone with the Wind.

In this 1926 photo taken at the gardens, you can see Busch’s mansion, “Ivy Wall,” in the background. The two older women pictured wear light colored dress, typical for the summertime. While the shape does nothing for their figures, they certainly look cool.

Both of these dresses look a little long for the styles of 1926, when fashionable lengths were just below the knee.  However, it was typical for older women to favor longer lengths. Both women also wear dark stockings, while younger women of the era had moved on to lighter colors. But there are youthful elements to their outfits as well, including the small ruffles at the sleeves and neckline of the dress on the left and the modified sailor collar featured on the right, something I’ve seen most often in clothes for teens. Their cloche hats are exuberantly decorated with flowers, so exuberantly that I wonder if they did the work themselves. I’m sorry we can’t take a peak underneath the hats to see if they had bobbed their hair.

Pajama Party
Does this Hat Make my Head Look Big?
Mother and Daughter, Late 1920s
This entry was posted in 1920s and tagged hats/headcoverings, skirt length. Bookmark the permalink.