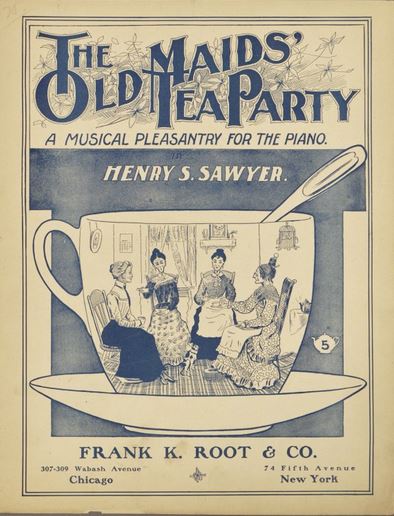 The term “old maid” has happily gone out of fashion. It would not have much meaning these days anyway, since most people no longer automatically assume that unmarried women are without sexual experience. But in the past, unattached women attracted negative attention. Why hadn’t they taken the usual path? This Musical Pleasantry from 1901 asserts that old maids had wanted to marry but had been betrayed by men. One was rejected by a faithless suitor; another discovered that her beau already had a wife. Now, in their old age, they claim to relish their single status.

Here’s the chorus. “I’m glad, dear friends, to be here tonight at this good old fashioned tea. And gladder still we did not invite any men to spoil our glee. So I say, dear friends, let us merry be, let us drink our tea in peace. Let us swear from men to be forever free for they’re nothing but a flock of geese.” 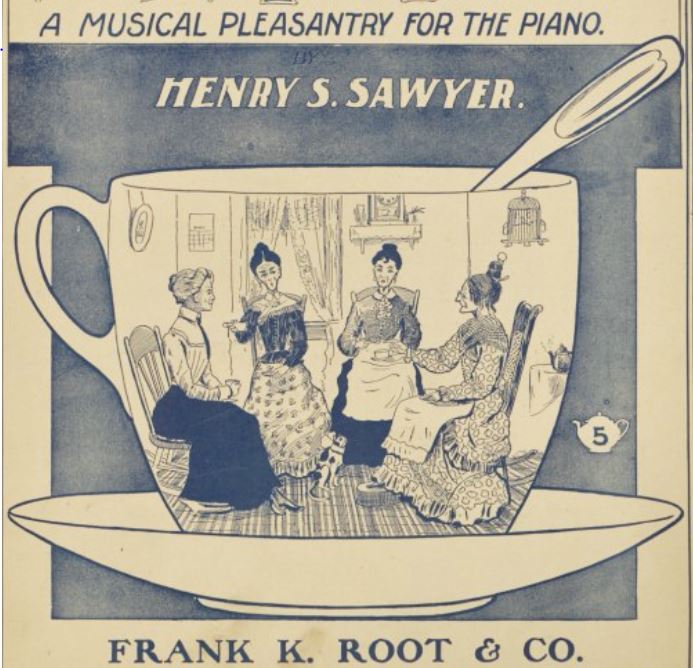 The wonderful thing about the sheet music is that it provides suggestions for the costumes. Only two characters have solo parts—the oldest woman and the hostess. The eldest old maid is advised to wear an old fashioned skirt and blouse, have gray hair with ringlets down the front, wear two or three shawls, and come in with an old fashioned bonnet. The hostess has powered hair done up in a Grecian knot, an elaborately gathered skirt covered with an apron, and a cat nearby.

The directions add two other characters, a “traveling old maid” and an “up to date old maid” (although the writer notes that more could be added). The traveler wears a poke bonnet and carries a bag filled with “everything imaginable needed in travel, such as a snuff box, smelling salts, handkerchiefs, etc.” She also brings a parrot in a cage and an umbrella. The woman who tried to keep with current styles is the most colorful. Her costume includes a skirt and blouse in “bright, odd” colors and face powder “to give the effect of artificial youth.”

Where was this performed? I found no references in large newspapers, but discovered a brief description in the February 1, 1908 edition of the Breckenridge Bulletin from Colorado. “’The Old Maids’ Tea Party’ was a laughable production. Eight demure maidens, appropriately clad, were about to enjoy a comfortable cup of tea together while dancing a stately minuet and congratulating themselves that no men, known as ‘geese,’ were present.”

This entry was posted in 1900s and tagged Colorado, popular culture. Bookmark the permalink.