A Fashion Show in California, 1930 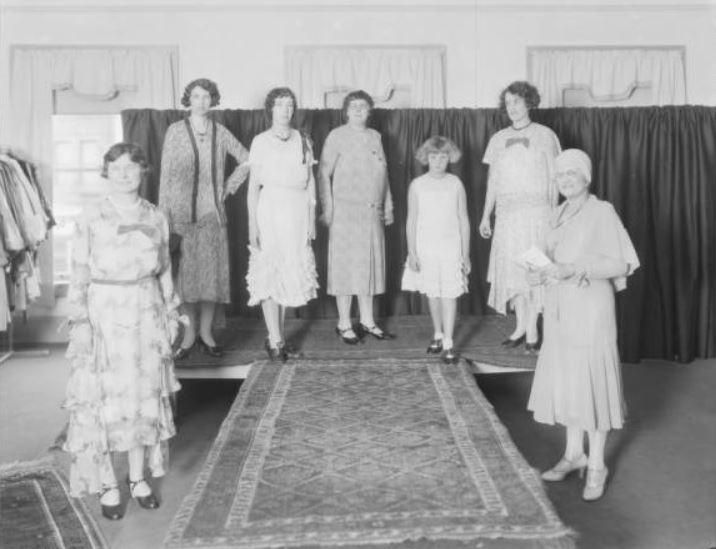 While a change in the decade does not always mark a change in fashion, 1930 brought big shifts in fashion. Hemlines dropped and the waist line for women returned to its natural position. That meant that many popular styles from the Roaring Twenties were now “out.”

But how quickly did these new fashion trends make it from Paris and New York to other cities and towns? Jen Orsini from the blog Pintucks sent me a link to this 1930 photo from the Huntington Library. Taken at a fashion show at the F. C. Nash department store in Pasadena, California (home of the Rose Parade), it shows that late 1920s styles were still on offer. It’s interesting that the show included models in a range of ages and sizes and ages. It’s possible that the two women in front might be older than the others.

Only three of the models show dresses at their natural waists. While all the hems are longer, several still have the fluttery uneven style of the previous decade. For sake of comparison, I looked through Stella Blum’s Everyday Fashion of the Thirties as Pictured in Sears Catalogs. Her entries for 1930 do show some dresses with slightly dropped waistlines—although none so low as the larger woman in the center wears. However, there were very few uneven hemlines and no flyaway handkerchief effects.

I think someone at F. C. Nash really liked ruffles.

Elsie de Wolfe Recommends...
Jo Copeland and her Daughter
Stylish Stout in the 1920s
This entry was posted in 1920s, 1930s and tagged California. Bookmark the permalink.

2 Responses to A Fashion Show in California, 1930