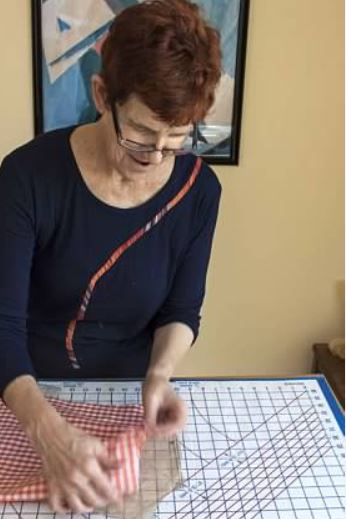 At work on a muslin. Photo by Bob Moeller

People who love to sew seem to have trouble deciding what to call themselves. Many home-based craftspeople use “sewer,” but that sounds better than it looks. The written version conjures up images of subterranean piping systems.

Creators of art-to-wear and couture level designs have invented the new word “sewist.” With this title, parallel to artist, they are claiming their work’s status as an art. However, this term leaves out those of us who do not have the same high skills and ambitions. I see my sewing more as a craft than an art.

For awhile, I tried using the humble yet venerable term “seamster,” which I discovered in a history book about the textile trade. In Old English it was originally applied to women, but eventually it was used for men. I liked its gender neutral connotations. Its contemporary sound was also a plus, evoking the ubiquitous “hipster.” But eventually I felt a little odd applying the term to my plus sixty year old self.

So I have come back to the tried and true—seamstress. This might evoke images of garrets, sweatshops, and tuberculosis, but the word has an impressive history. It is what my grandmother called herself. It also reflects what I do. My sewing is practical, aimed at the everyday. Of course I try to do beautiful work. However, but wearability, not perfection, is  my goal. I am not an artist with the needle, nor do I want to compare myself with highly skilled professionals.

So for now—call me seamstress.

Thanksgiving in Milwaukee, 1960
The Fashion Lag on the Small Screen
Book Review: Dress Codes by Richard Thompson Ford
This entry was posted in 2010s, General and tagged About Me, sewing. Bookmark the permalink.

10 Responses to Call Me Seamstress