A Fashion Controversy—What to Send to Russia 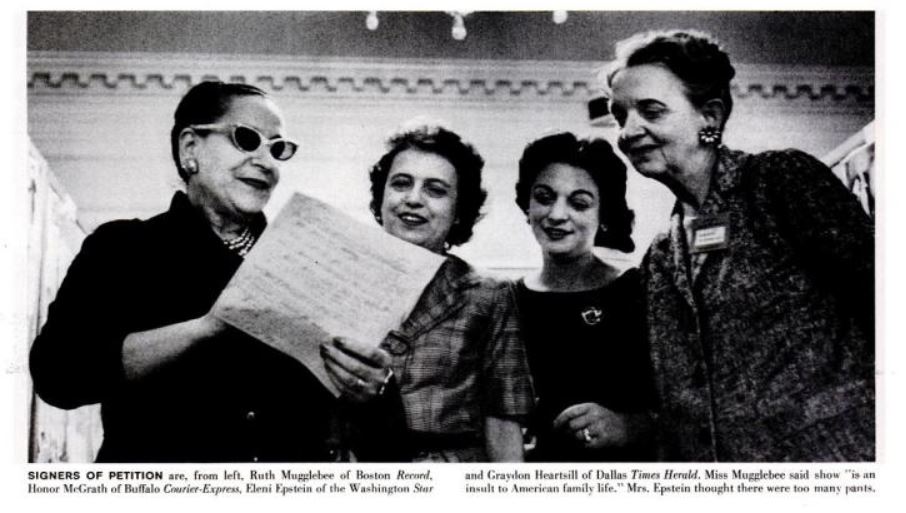 In 1959, the United States staged a big exhibition in Russia designed to publicize the American way of life. It was the setting for the famous “kitchen debate” between Richard Nixon and Nikita Khrushchev, where they argued about the merits of capitalism and communism as paths to economic well being. In addition to modern kitchen appliances and makeup demonstrations, the exhibit featured daily fashion shows designed to give a sense of how real Americans lived.

An article in Life magazine, “Propaganda Goof over US Fashions,” revealed that the fashion show had an interesting back story. Put together by fashion publicist Eleanor Lambert and Bergdorf Goodman executive Leonard Hankin, it was presented to an audience of 250 fashion editors before heading off to Moscow. Staged in a tableau style, the scenes included three African American models appearing in an integrated dance party, an integrated barbecue, and even a wedding scene with a white couple attending a black couple’s ceremony.

The show caused an uproar among some of the editors in attendance, who circulated a petition objecting to it traveling to Moscow in its current form. A few rejected the integrated tableaus, saying that they didn’t give a realistic picture of the United States.Others didn’t like the clothes. They felt there were too many casual pieces and far too many pants. Ruth Muglebee of the Boston Record called the show “an insult to American family life.”

The story was taken up by the New York Times, which ridiculed the petition signers for their narrow mindedness. But their comments did bring results. By the time the fashion show headed to Moscow, both the integrated wedding and barbecue scene had been dropped.

At the Grandparents' House, 1957
Portrait with Donkey, 1957
Winner of the Christmas Home Decorating Contest, 1956
This entry was posted in 1950s and tagged African American, pants. Bookmark the permalink.

3 Responses to A Fashion Controversy—What to Send to Russia