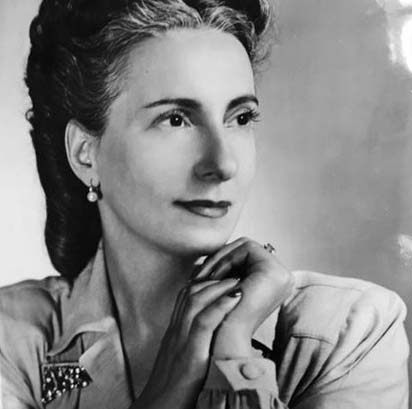 I love archives. Show me a stack of old letters, clippings, and photographs and I get very excited—who knows what treasures might be there? When I discovered that the Hungarian-American designer Eta Hentz (aka Madame Eta) had a small archive at the Fashion Institute of Technology in New York, I made plans to work there on a recent visit to New York. I had been to the library several times, but had never worked in Special Collections where their archives are housed. The staff is very welcoming and helpful, but be sure to write ahead to make an appointment. 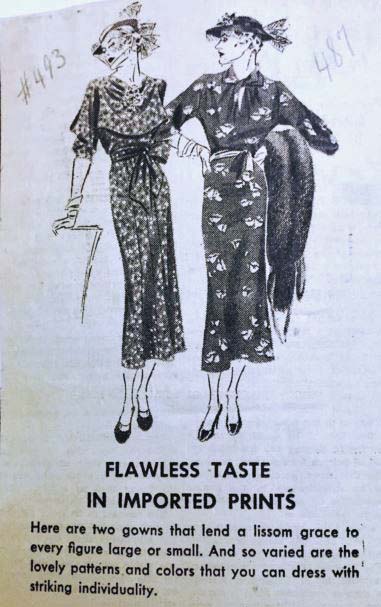 The Hentz archive consists of nine scrap books filled with announcements and newspaper clippings from the mid thirties to the late forties. She had been working in the New York garment industry since 1923, but her scrapbooks start with the announcement of her first solo company, Eta Inc., a decade later. The first books are mainly filled with advertising for her clothes in upscale New York shops. I discovered that in the early years, her name was often not mentioned in ads. 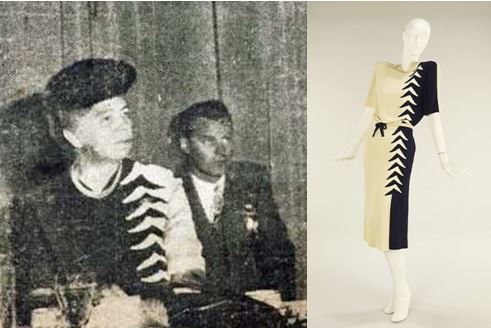 In the mid 1940s, Eta changed course. She reconstituted her company, now called Ren-Eta, and hired the famous fashion publicist, Eleanor Lambert. There was literally an explosion of information about her brand from 1944 on. She was featured in the New York Times, her 1944 fall collection inspired by classical Greek designs was part of a fashion show at the Metropolitan Museum of Art, and short features about her work began appearing in newspapers across the United States. One scrapbook included a clipping of Eleanor Roosevelt wearing one of Eta’s Greek inspired dresses. Did the designer reverse the standard colors for the first lady, so that more dark would show than light?

With her publicist’s help, Eta established herself as a designer catering to very well off older women. Her innovation of “proportionate sizing,” where all elements of a dress were reconfigured to flatter the height and breadth of the wearer, was first mentioned in 1945. From then on it was a standard feature in articles about her. The New York department store Lord & Taylor took her on as one their designers promoting an “American Look.”

Judging the scrapbooks, 1948 was a peak year for Madame Eta. An article featuring her clothes appeared in Vogue, inspiring many newspaper articles about her line. “Smartness has nothing to do with size,” was the title of one in the Christian Science Monitor. The upscale Texas department store, Neiman Marcus, featured her clothes at a fashion show with the theme “The Woman who Never Grows Old.” Many fashion columnists recommend her dresses for mothers of the bride.

But then, mysteriously, the record ends. What happened after 1948? The archive contains no private letters or business records that might explain what happened to Madame Eta’s line. Well, maybe there is one hint. In an article for the Cleveland Ohio News, the designer expressed her doubts about the New Look. “Madame Eta eschews full skirts completely and instead uses a gentle easy line which flatters the larger figure.” Perhaps her carefully conceived ideas about proportion did not fit with the big post war style shift.