If you compare a map of Europe map in 1913 to one made after the First World War, it is easy to see the explosive power of that conflict. Old empires disappeared and new countries took their place. In her insightful book Dressed for War, Nina Edwards argues that you could also see equally dramatic transformations by looking carefully at newsreels made before and after the conflict. The war profoundly changed the way people dressed. Although it is most detailed when discussing Britain, the book gives enough examples from the US, Western Europe, and Russia to give it an international flavor.

Using an impressive range of sources, from soldiers’ letters to women’s magazines, Edwards shows how the war greatly accelerated existing fashion trends. Clothing was already becoming simpler before 1914. The war made it, quite literally, more uniform. Ubiquitous uniforms influenced even those who didn’t fight. Librarians working in US military hospitals, for example, had their own uniforms. The trench coat, on every list of “must have” items these days, came from here. After the battles ended, some women argued for keeping uniforms in the workplace because of the ease of dressing. It was hard for them to return to the fashion cycle. 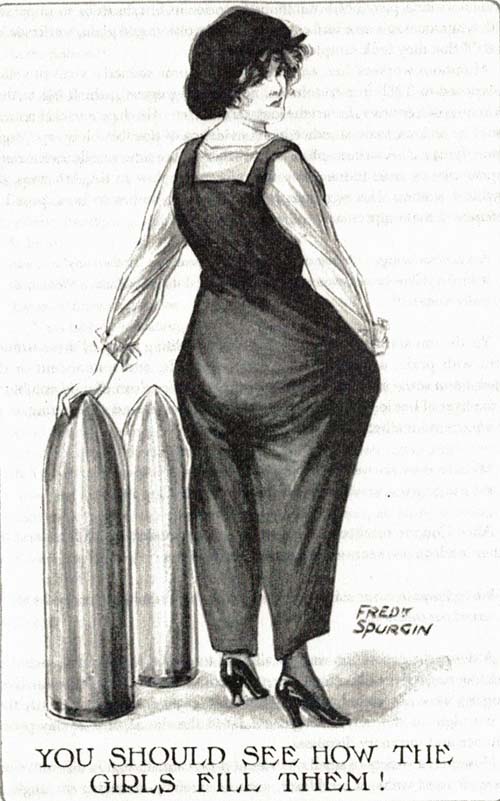 Postcard by British artist Fred Spurgin, from Dressed for War

The war directly changed the color of clothing, since most of the world’s artificial dyes were made in Germany. While color returned afterwards, it sometimes had a different meaning. This was particularly true for the color black. Since so many people were in mourning, black became an everyday color, more acceptable in many social situations. She contends that the popularity of Chanel’s “little black dress” really had its origins in the war. Everyone needed such an item in her closet that could transition easily from a funeral to a dinner out.

Given my interest in older women, I was fascinated by the brief sections of the book that showed how the war intensified generational conflict. Older women, less likely to join military units, looked askance at younger women in their male inspired uniforms. One young British cook asked her employer for a reference to work in the Land Army. The older woman was scandalized, since her cook would then be wearing pants. “It means that you’ll be dressed as a man!” she exclaimed.(62) But of course it was the old who lost this battle. “It was the older generation that bore the blame for the war; fashion seemed to be for the young alone.”(176) 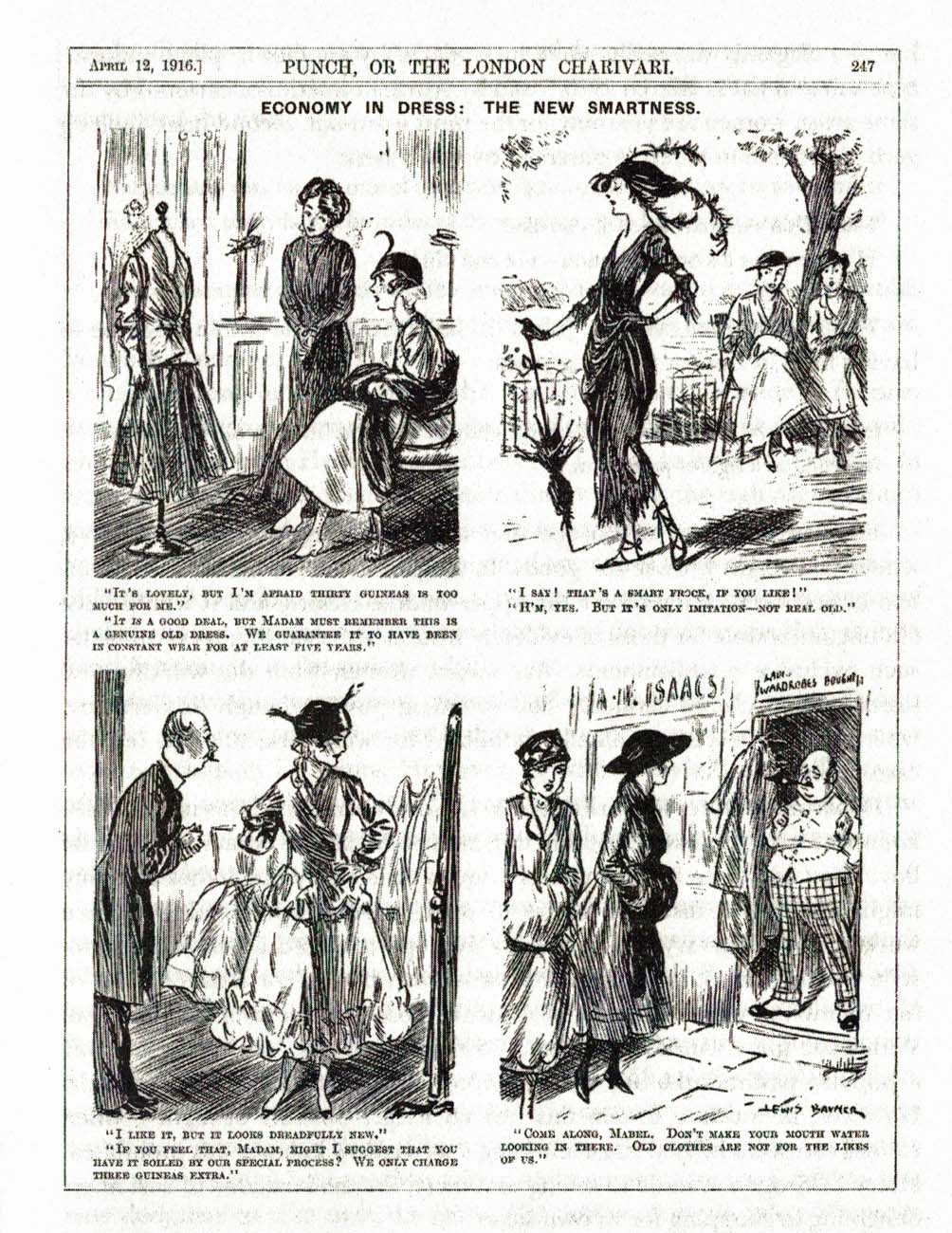 The war encouraged sartorial self invention. Some young women at the front fashioned their own uniforms in order to be able to stand out from civilians, especially the prostitutes that frequented battle areas. Women back home altered their clothes themselves in order to move better in the new jobs they had taken on. Even wealthy women changed their dress. The cartoon in the satirical British journal Punch above shows the well off paying to have their clothes distressed in order to look like part of the crowd.

Although Edwards’ focus is on clothes, the book shows how the war affected every aspect of daily life, from shaving implements to children’s games. Written with an eye to the telling detail, it is a fascinating read. Where else could you learn that French women made their own jewelry out of copper trench wire or that the color orange only became popular when it was renamed “tango”?

A Patented House Dress, 1915
Looking Back to the Flu Epidemic, 1918
The Panama-Pacific International Exhibition, 1915—Part One: The Elegant Matron
This entry was posted in 1910s and tagged book review, comparative, World War One. Bookmark the permalink.

4 Responses to Book Review: Dressed for War by Nina Edwards