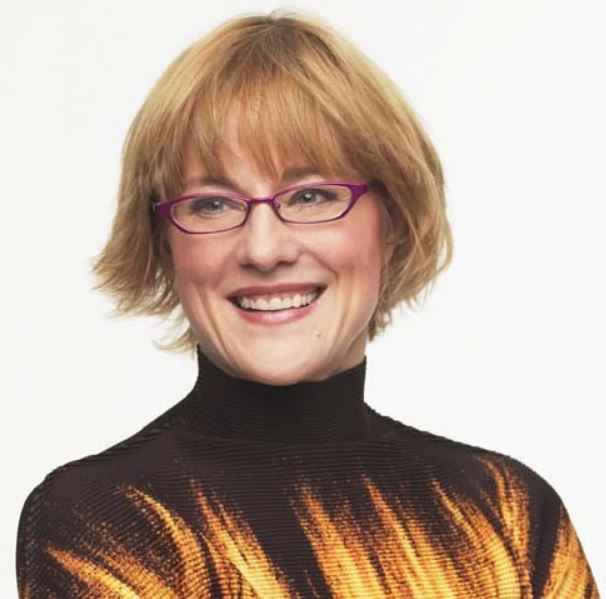 Perhaps you have never heard of Jhane Barnes, born in 1954, but she is one of my very favorite designers. I hunt for her menswear on ebay, primary silk or cotton sweaters, and refashion them to fit me. So far I have remade five of her sweaters for myself, two for my sister, and I have another on my sewing list. I’m not much of a collector, but I make an exception for her intricately woven, colorful knit fabric.

A sampling of my Jhane Barnes sweaters

Barnes went to FIT and began making menswear right of school in 1976. Only a few years later, in 1980, she won the Coty Fashion Critics Award. She wracked up other prizes for her innovative menswear, which featured simplified designs combined with intricate fabrics. When she first got started, she wove her textiles herself. She then began to work with mills in Japan; when that got too expensive, she moved her production to China.

In 2013, Barnes stopped designing clothes altogether. Here is an excerpt from a blog post from that year. “Making a quality product at a price that retailers and consumers want has become nearly impossible. Competition continues to drive down retail prices, and it’s gotten to the point where I can’t maintain the quality I’ve always offered unless I price myself out of the market.” If the truth be told, I am part of the problem–I’ve only bought her expensive clothes used.

These days Barnes makes textiles for furniture and flooring. She has a few other irons in the fire, like furniture design and a line of eyeglass frames. There must be tens of thousands of her sweaters still out there, but I still feel like they’ve become an endangered species.

Are You a Natural Fiber Snob?
Mother of the Bride
A Sewing Vacation at sewBoise
This entry was posted in 2000s, 2010s and tagged designers, textiles. Bookmark the permalink.