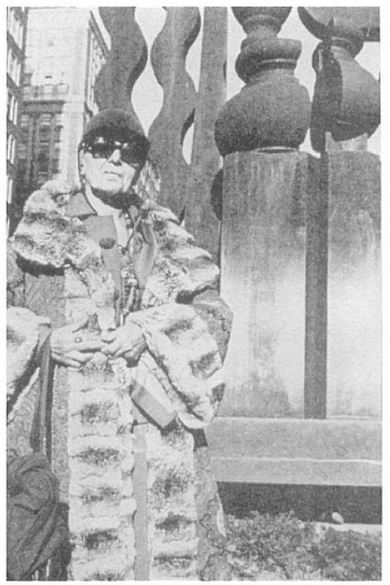 From Arnold Scaasi, Women I Have Dressed (and Undressed)

Once described as “a cross between Catherine the Great and a bag lady,” the artist Louise Nevelson (1899-1988) was an eccentric dresser. Born in the Russian Empire and raised in Maine, she left for New York as soon as she could. There she studied art and modern dance. By the 1940s, she had established her own original style of sculpture mainly using wood pieces, often salvaged, in elaborate collage structures, all painted black.

Collage describes her approach to dress as well. She combined unusual elements, often with her own hand made jewelry. Unlike her artistic work, her clothes were not all black. There were colorful Chinese robes, Guatemalan textiles, old kimono. As she aged, she added a head covering to the mix.

Nevelson did not become financially successful until she was in late sixties. At that point, she decided to have some clothes custom made by the then stylish designer, Arnold Scaasi. In his book, Women I have Dressed (and Undressed), Scaasi described her as coming to his studio wearing a denim work shirt, khaki pants, a fur covered wizard hat, and three pairs of false eyelashes. “She was well known for wearing these bits and pieces, odd belts, shoes, and strange headgear, also for the way she mixed up items of clothes.  She always wore something on her head, usually a jockey cap or a babushka but sometimes a huge black shiny garden-party straw hat or a cowboy Stetson–whatever the fancy took her.” 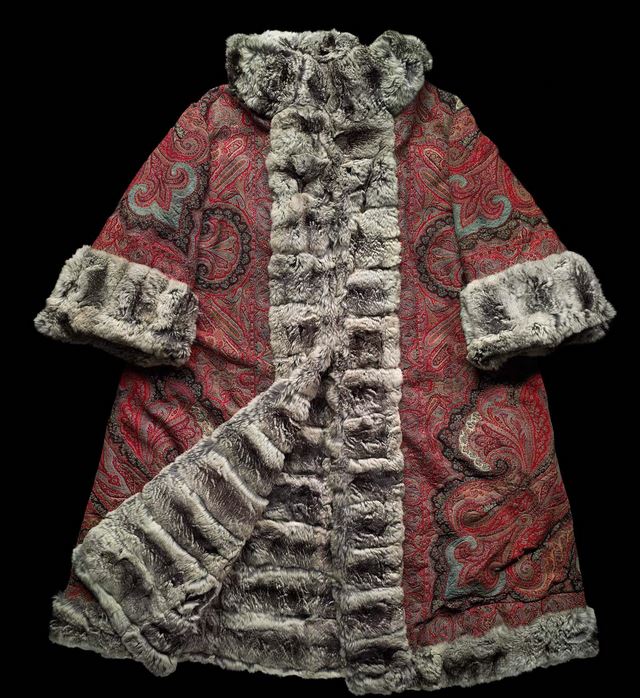 Scaasi’s regular collection bored Nevelson, but together they dreamed up more interesting outfits, like velour lace ponchos and dresses made of heavy brocade. In 1972, Nevelson ordered a chinchilla lined coat from the designer. He decided that a few pieces from her collection of vintage paisley shawls would be a perfect exterior. This coat became a kind of signature piece for Nevelson, and she posed wearing it in front of one of her sculptures on Park Avenue. It is now in the collection of the Museum of Fine Arts in Boston. Haute hippies of today have nothing on Nevelson.

This entry was posted in 1970s and tagged coats, eccentric, fur, New York. Bookmark the permalink.