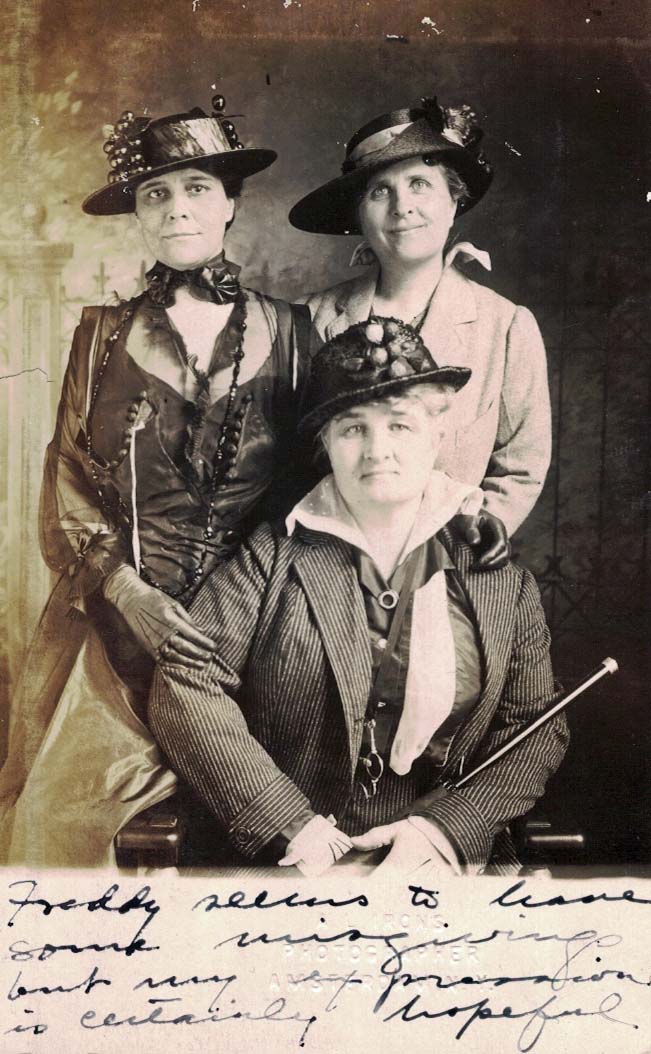 This wonderful photograph printed on a post card came with a lot of information. First of all there is the written message on the front, “Freddy seems to have some misgivings but my expression is certainly is certainly hopeful.” (The back is empty and there is evidence this was glued into an album.) Next there is the embossed photographer’s identification, A. L. Irons, Photographer, Amsterdam, N.Y.

It came with no date, though.  By looking at the suit jackets, I thought it might have been taken in the late 1900s.  When I asked for help from the experts, I learned I had looked at the wrong clues. While most women kept their suits for a long time, they changed their hats to stay in style. These hats, according to Jonathan Wolford and Barbara of Rue de la Paix on the Vintage Fashion Guild Forums, show style changes around 1915-16. In addition, Witness2fashion and Barbara pointed out that the silk dress was worn by the woman standing on the left was also typical of that time. I still have a lot to learn!

The card writer with the hopeful expression, standing to the right, wears a light colored wool suit. I am puzzled by what appear to be small wings coming out of her back collar. They are too distinct to be part of the background. The woman in front wears a sharp pinstripe suit, softened with a collar in what might be dotted Swiss cotton. She carries an umbrella and wears a lorgnette on a ribbon. It’s hard to figure out what decorates her narrow brimmed hat. At first I thought it might be badges, but after enlarging the photo I’m more inclined to say they are straw flowers.

Most puzzling is the woman on the back left with a hat abundantly adorned with cherries. While the others are dressed for the street, she is wearing a low cut black (or very dark) silk dress covered by a filmy blouse. Not only does she have a ribbon at her neck, but she also wears a long black beaded necklace.

These three might just be pushing fifty. Were they relatives? Neighbors? College chums? Maybe they were a team of happy spinsters, like those described in the Tish novels by Mary Roberts Rinehart.

Looking Back to the Flu Epidemic, 1918
You Can Keep Your Hat On
Harriet Strong, the Pampas Woman
This entry was posted in 1910s and tagged hats/headcoverings, jewelry, New York. Bookmark the permalink.