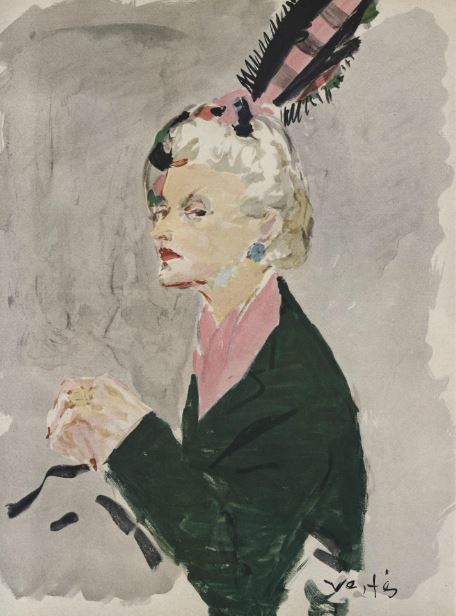 Here is my favorite research method of all time–go into a library and wander around stacks of books on a topic of interest. Open many books and thumb through them until something strikes my fancy. That is how I discovered Fashion Drawing in Vogue by William Packer (Thames and Hudson, London, 1983).  It introduces the magazine’s great artists and traces the decline of illustration from the 1960s on.

Although the book makes no mention of Mrs. Exeter, I was inspired to investigate how this older icon was drawn in American Vogue. (The British edition is different). She was the subject of many of the magazine’s most gifted and prolific artists. Most drawings of Mrs. Exeter took place between her introduction in June 1948 and 1952. Vogue cover artist and designer Marcel Vèrtes made the beautiful drawing above to feature a hat by Tatiana of Saks.

The first drawings were by Danish American illustrator Dagmar, who offered, according to Packer, “a lightness of touch and freedom of technique.”(168) She remained the most prolific creator of Mrs. Exeter, drawing her for at least twelve articles. She always focused more on the clothes than on the face. 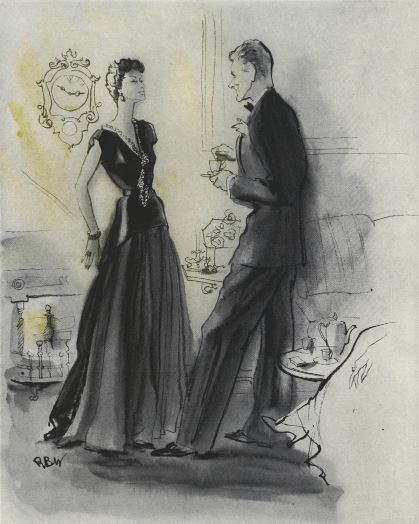 The next artist to tackle our older heroine was the great René Bouèt-Willaumez, who signed his work RBW. He gave Mrs. Exeter a kind of knowing, woman of the world quality. By my count, he presented her four times from 1948 to 1951. 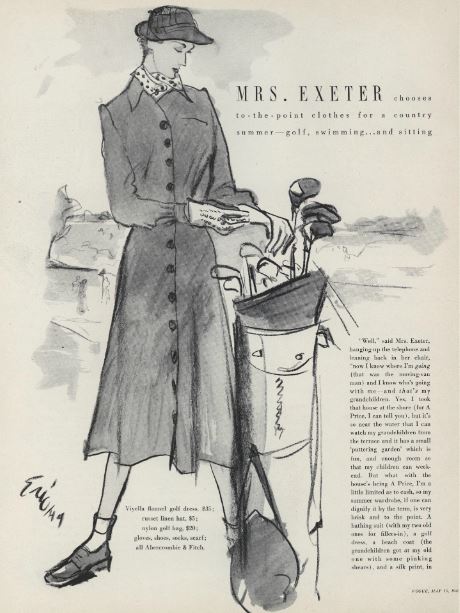 Carl Ericson, who signed his work Eric, first drew Mrs. Exeter in 1949. His initial efforts showed her in evening dress. He went on to create her in sports clothes and day clothes. This early drawing on his of her as a golfer is one of my favorites. 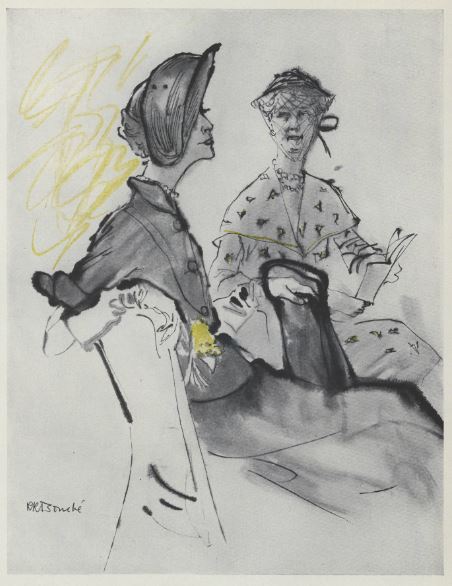 In the mid 1950s, it was much more common to see photographs of Mrs. Exeter than drawings. Her sketched version made a modest comeback in the late 50s, created by a new crop of artists, including Esther Larson, Luciana Roselli, and Evelyn Marcil.

By 1962, her last year, Mrs. Exeter only appeared twice, both times in drawings by Evelyn Marcil. By that time photography dominated the pages of the magazine, making the sketches of Mrs. Exeter seem quaint. And how sad it is that our last glimpse of her shows her in her underwear.