Old Woman of the Freeway 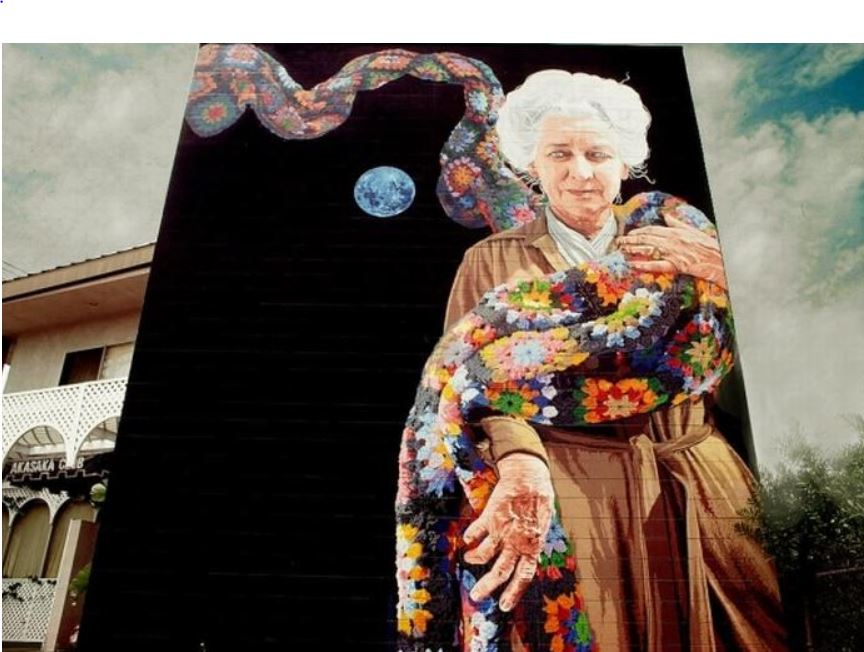 Mural artist Kent Twitchell undertook an unusual project in Los Angeles in 1974. He painted a huge image of an older woman who was visible to north bound drivers on the Hollywood Freeway. With her billowing white hair, sky blue eyes, loose dress, and granny square afghan, the “Old Woman of the Freeway” was a favorite with LA drivers. The popular mural contradicted popular images of Los Angeles’s youth-obsessed culture.

According to Twitchell, the painting was in honor of his grandmother, who had lived in Hollywood. He used the seventy year old character actress Lillian Bronson (the judge on Perry Mason) as his model. One of the mural’s most distinctive elements, the heaven bound afghan, was based on one his grandmother had made for him.

The mural did not age well. First the bottom half was obscured by a parking garage. “If she ends up looking like she has been shoved into a closet, it will be a reminder of how we treat old people,” Twitchell said (“’Old Woman of the Freeway Vanishing,’” Los Angeles Times, Nov 2 1981). Then, in violation of state law, it was painted over in 1986 to make way for advertisements. Public outcry was fierce and Twitchell sued the company and received funds to restore it. The partial restoration was soon scarred by graffiti. It appeared that the Old Woman had no place in downtown Los Angeles.

But the story does not end here. Art enthusiasts in the San Fernando Valley commissioned Twitchell to recreate his mural in their part of the sprawling LA basin. After some negotiation, it ended up on the student services building at Los Angeles Valley College. The model for the old woman was still Lillian Bronson, but the much larger granny square afghan has a different inspiration. This one, measuring 5 feet by 20 feet, was custom made by Peggy Baxter of the Los Angeles knit guild. Read the engaging account of the mural’s rebirth on Ellen Bloom’s blog, Los Angeles is My Beat.

And when you think about it, a community college is a much better spot for an old woman than a freeway.

Mae Reeves, Queen of Hats
Can We Talk About Bodies?
Grace Slick's Mother
This entry was posted in 1970s, 1980s, 2010s and tagged California. Bookmark the permalink.

4 Responses to Old Woman of the Freeway