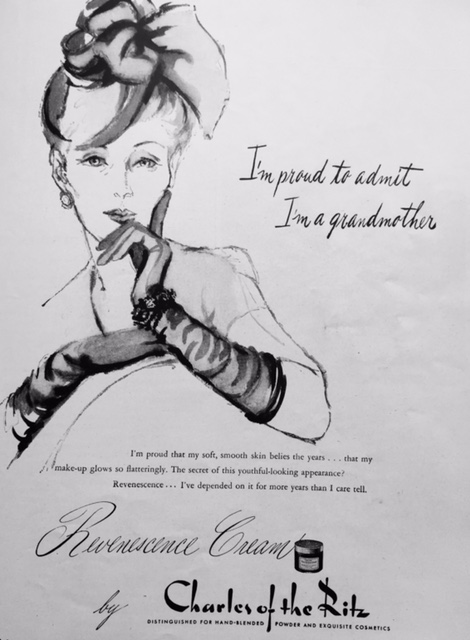 Most advertisements containing grandmothers refer to their homey, family loving qualities. This is the earliest I’ve seen that praises her as a glamorous figure. It’s worth noting that this stylish grandmother appears over half a year before the birth of Mrs. Exeter in Vogue in June 1948. Maybe there was something in the post World War Two atmosphere that made people see older women as a new consumer market.

I discovered this ad in the reference room of the main library in Denver. My sister and I happily spent the better part of an afternoon thumbing  through their complete collection of Harper’s Bazaar magazines. She was looking for interesting textiles; I was on the hunt for older women.

Iphone in hand, I chose issues from 1935 (height of the Depression), 1947 (the start of the New Look), and 1960 (a fashion era I like.) I learned a lot. First of all, it’s hard to take photos of bound volumes, since the pages are apt to be curved. Any advice on how to solve this problem? Second, my record keeping techniques need work. I believe this image is from November 1947, but I cannot swear to it. Getting references wrong is akin to grand theft for a professional historian, so I need to up my game.

These days, you can stumble over piles of anti-aging creams in every supermarket. In 1947, Charles of the Ritz was in the vanguard of this beauty trend. The company no longer exists, sold first to Squibb, then to Yves St. Laurent, then to Revlon. It is mourned by many. Read through the comments on this blog post. And for the adventurous, you might want to try a new version of this cream, My Essence Moisturizer, an attempt to recreate a classic.

This entry was posted in 1940s and tagged advertising, beauty products, skin. Bookmark the permalink.