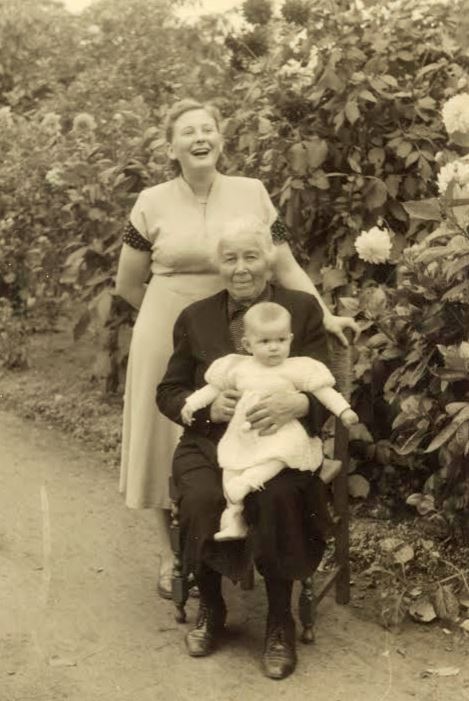 A German reader and sewing blogger, Mema, sent me a photo of three generations of her family taken in 1954. She is in her eighty year old grandmother’s arms, with her laughing mother in the background. They lived in a small town in the western part of what was then West Germany. Her grandmother ran a farm when she was younger. Once she was widowed she moved in with one of her sons and helped him manage his restaurant and inn until she died at 86.

Mema writes that all old women looked like her grandmother when she was growing up. “The black dress, the hair style with a bun at the back, the sturdy shoes were all typical of that time and place. The widows wore black.” Those whose husbands were still alive wore similar dresses, but in lighter colors.

The outfit looked old fashioned to me. Were there eighty old year American women in the early 1950s who looked similar? 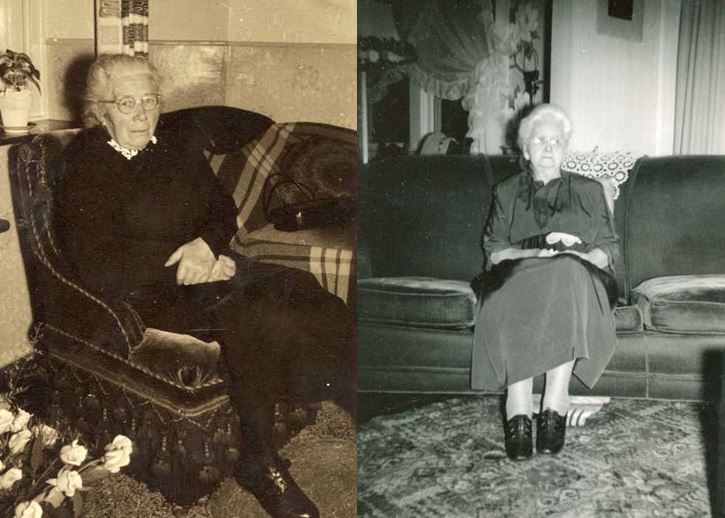 The answer is yes! Mema’s grandmother is featured on the left, in her black dress, granny glasses, and sensible shoes. On the right is “Aunt Nellie, who was 80 years old on December 24, 1952,” a snap shot from my photo stash. Aunt Nellie has the same hairstyle and glasses. Her sensible shoes appear to have small heels and she wears transparent stockings instead of black ones. Her dress has the sheen of silk (it might be her birthday, after all) but I’m guessing that is black. Their poses and even their furniture look very similar.  Might there be an international language of dress for the “old old” in the fifties?

This entry was posted in 1950s and tagged colors, comparative, hair, shoes. Bookmark the permalink.