In 1980, the Vogue Pattern Book introduced former movie star Arlene Dahl as a fashion adviser to older women. Then in her mid fifties, she had left acting behind and reinvented herself as a beauty consultant. For the next few years, the magazine published regular articles where Dahl offered fashion tips (“soft hats, bold jewelry”) and recommended patterns she felt were best suited for “mature” women. “If you wear sizes 8 to 22, keep In Vogue with Irene Dahl,” captions read.

Dahl was not the only older woman featured in the magazine. Gray haired models showed off designer looks from Bill Blass and patterns from the Very Easy Vogue series. They were especially well represented in the “Sizing Up” line of half-sized clothing. Several issues included features about real life seamstresses who worked with Vogue Patterns, often older women with established careers.

Why did Vogue Patterns decide to reach out to the older woman? Luckily I was able to get in touch with Polly Roberts, who was the very young editor of the magazine in the early eighties. She told me that the magazine was responding to letters from older customers who felt that the look of the magazine had become too young. They couldn’t see themselves in many of the clothes on offer. 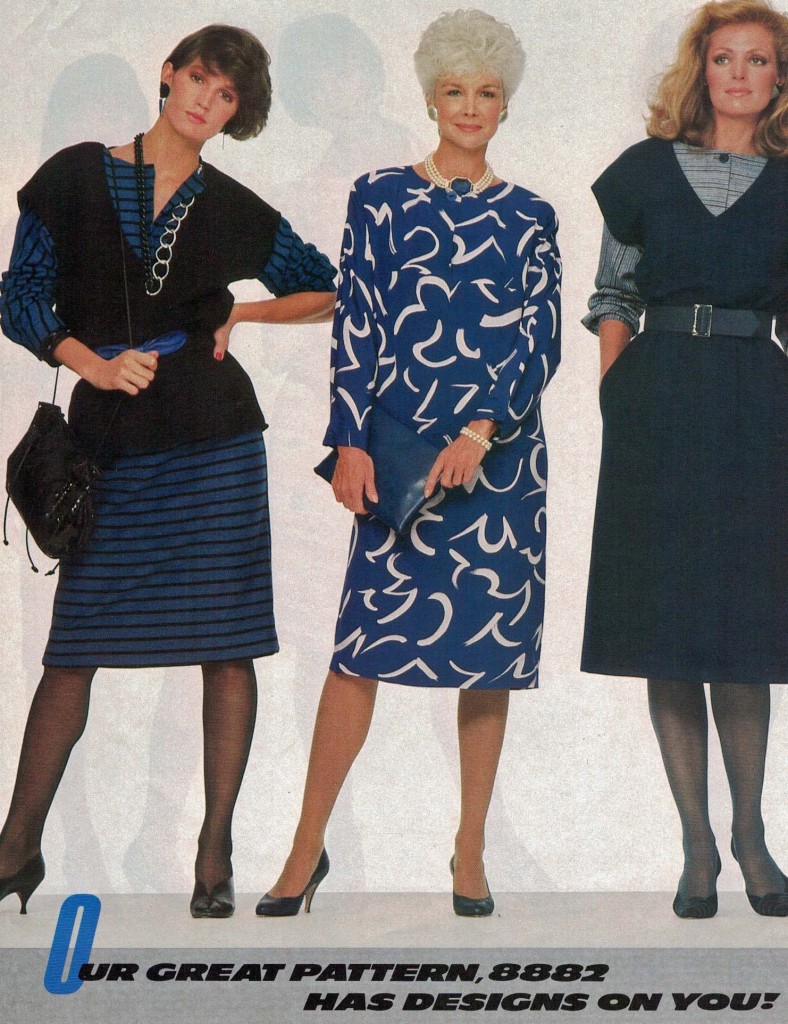 According to Roberts, the company realized that a shift in the sewing community was underway. As more and more young women entered the workforce to build careers, they had less time to sew. But older customers still did, and they deserved more attention. As a result, the magazine shifted focus. The editors hired older models, styling their clothes in more conservative ways. In order not to leave younger readers behind, they also showed how the same pattern could be reinterpreted for many ages with simple changes in fabric and accessories.

What a difference from Vogue Patterns of today, where there’s rarely a gray hair or crinkled eye to be seen! Maybe we should start writing letters…

Do You Have a Signature Piece?
Lucy's Navy Blue Polka Dot Dress
Searching for Koko Beall

This entry was posted in 1980s and tagged advice literature, sewing. Bookmark the permalink.

3 Responses to Vogue Pattern Book and the Older Woman