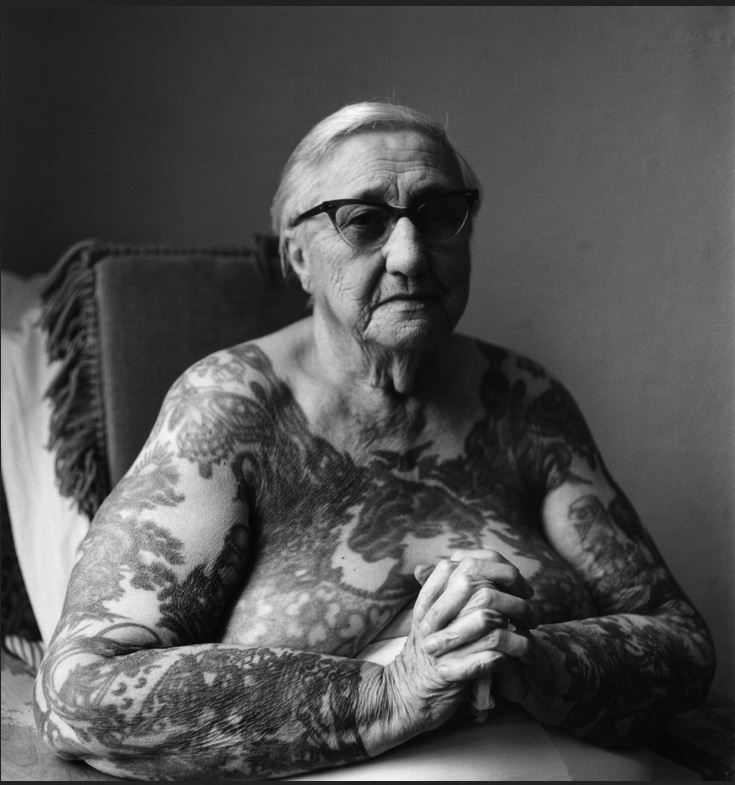 Renowned San Francisco photographer Imogen Cunningham has an answer for what tattoos can come to look like on older bodies. “It looks like lace, doesn’t it?”

This remarkable photo comes from Cunningham’s book, After Ninety (University of Washington Press, 1977), which includes portraits of over eighty nonagenarians from all walks of life. This woman, Irene “Bobby” Libarry, had been a carnival performer. Cunningham herself was in her nineties when she took this photo in 1976. She died that same year.

Photographer Margaretta Mitchell, who wrote the introduction for this posthumously published book, made these observations about Cunningham’s views on aging. “Never having been considered a beauty herself, Imogen had long ago accepted her face…She wanted that freedom from the vanity of physical beauty for those she photographed. It could be said that through her portraits she wanted others to deal with this acceptance as she herself had.” (18) Or perhaps she had developed an eye for a different kind of beauty. When looking at this woman, some might see faded old markings on stretched out skin. Cunningham saw lace.

Mother’s Day at the First Christian Church, 1973
A Granny in a Granny Dress
The Gracious Woman from Sears, 1971
This entry was posted in 1970s and tagged skin. Bookmark the permalink.