A Christmas Party at the Beautee-Fit Company, 1947 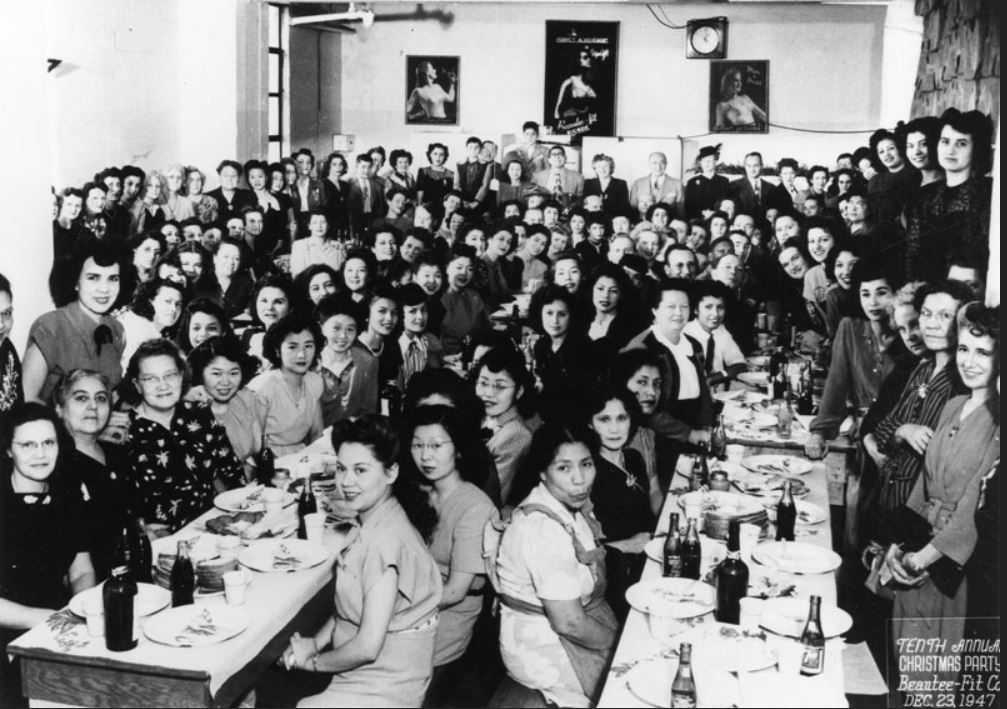 What a diverse group of women employees at the Beautee-Fit Company in Los Angeles. Most look to be Asian or Mexican American, with a few Anglos here and there. I wonder if some of the Asians were Japanese Americans just out of the internment camps. We don’t get the full effect of their holiday fashions since almost everyone is sitting down.

I found ads for Beautee-Fit beginning in the 1930s. The company made all kinds of underwear but was best known for its bras, which you can guess by the pin up style pictures on the back wall. I counted only a handful of men in the room, all standing beneath the ads. Just one woman, maybe the wife of one of the bosses, wears a hat.

Most of the workers were young, judging by this photo, but there are a few older faces in the crowd. Look at this pair, on the lower left. The elegant gray haired woman wears a simple dark dress, her hair pulled back from her face.  The woman beside her has on what might be a belted shirtwaist dress with designs that look like comets and stars.  There are very few prints in the room, and none other so bold.  It looks like she was ready to celebrate!

Protesting in 1947
The Way You Wear Your Hat, 1947
Mary Colter--Architect of the Southwest
This entry was posted in 1940s and tagged Asian American, Chicana Latina, underwear. Bookmark the permalink.

1 Response to A Christmas Party at the Beautee-Fit Company, 1947